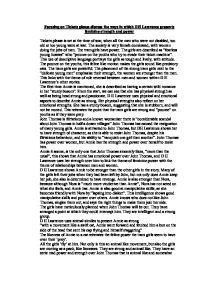 Focusing on Tickets please discuss the ways in which DH Lawrence presents feminine strength and power.

Focusing on Tickets please discuss the ways in which DH Lawrence presents feminine strength and power Tickets please is set at the time of war, when all the men who were not disabled, too old or too young were at war. The society is very female dominated, with women doing the jobs of men. The tram girls have power. The girls are described as "fearless young hussies" who "pounce on the youths who try to evade their ticket machine". This use of descriptive language portrays the girls as tough and lively, with attitude. The pounce on the youths, this feline like motion makes the girls sound like predatory cats. The tram girls are powerful. The placement of the strong tram girls next to the "delicate young men" emphasise their strength, the women are stronger than the men. ...read more.

Annie is attracted to John Thomas, but DH Lawrence shows her to have strength of character, as she is able to resist John Thomas, despite his flirtatious behaviour, and his ability to "vanquish one girl then another". John Thomas has power over women, but Annie has the strength and power over herself to resist him. Annie it seems, is the only one that John Thomas sincerely likes, "more than the usual", this shows that Annie has emotional power over John Thomas, and D H Lawrence uses her strength over him to link the theme of feminine power with the theme of relationships between men and women. D H Lawrence shows Annie to be stronger than the other girls in the story. Many of the girls left their jobs when they had been left by John, but not only does Annie keep her job, she also is determined to have revenge. ...read more.

All the girls 'fly' at him. Not only is this an animal like movement, but also the girls are moving as a pack, like lionesses. They are strong and animal like. They have an eerie mad power and strength over John Thomas that is animal like and somewhat hideous. They are violently and physically powerful. At this point in the story, D H Lawrence shows the tram girls to have an un-human, unnatural power and strength. However their physical power is ironic, as it reflects upon their mental weakness. They had to hurt him, and they could not think of any other way to do so without using violence. Throughout the story, D H Lawrence presents the tram girls as having very different types of power, using language devices, irony and imagery to describe their actions. ...read more.