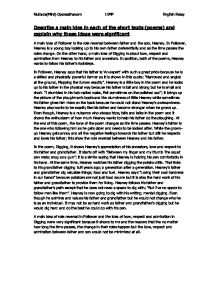 Follower and Digging by Seamus Heaney

Describe a main idea in each of the short texts (poems) and explain why these ideas were significant A main idea of Follower is the role reversal between father and the son, Heaney. In Follower, Heaney is a young boy looking up to his own father deferentially and as the time passes the roles change. On the other hand, a main idea of Digging is about love, respect and admiration from Heaney to his father and ancestors. In addition, both of the poems, Heaney wants to follow his father's footsteps. In Follower, Heaney says that his father is 'An expert' with such a great pride because he is a skilled and physically powerful farmer as it is shown in this quote; "Narrowed and angled at the ground, Mapping the furrow exactly". ...read more.

Even though, Heaney is a nuisance who always trips, falls and talks in the poem and it shows the enthusiasm of how much Heaney wants to help his father do the ploughing. At the end of this poem, the tone of the poem changes as the time passes. Heaney's father is the one who following him as he gets older and needs to be looked after. While the grown-up Heaney gets annoy and all the negative feelings towards his father but still he respects and loves his father; this show the role reversal between Heaney and his father. In the poem, Digging, it shows Heaney's appreciation of his ancestors, love and respect to his father and grandfather. It starts off with "Between my finger and my thumb The squat pen rests; snug as a gun"; it is a simile saying that Heaney is holding his pen comfortably in his hand. ...read more.

Heaney follows his father and grandfather's path except that he does not need a spade to dig with; "But I've no spade to follow men like them". Heaney is now going to dig with his writing; mental digging. Even though he admires and values his father and grandfather but he would not change who he is as an individual. It may not be as hard work as father and grandfather's digging but he would dig hard and do the best he could do with his pen. A main idea of role reversal in Follower and the idea of love, respect and admiration in Digging were very significant because it shows to me and the readers that the no matter how long the time passes, the change in their roles happen but the love, respect and admiration between father and son would not be minimized at all. ?? ?? ?? ?? Nutrada(Mint) Opassathavorn 11MP English Essay ...read more.

This answer is a response to an analytical question aimed at Seamus Heaney's poems 'Digging' and 'Follower'. The candidate shows a very basic response to the question, commenting on the messages of the poems well but struggling to delve much ...

This answer is a response to an analytical question aimed at Seamus Heaney's poems 'Digging' and 'Follower'. The candidate shows a very basic response to the question, commenting on the messages of the poems well but struggling to delve much deeper into the the connotations of the poems. Furthermore, contextual analysis is required for all candidate hoping to score higher than a low C grade, so unfortunately that is where this essay lies. What is good here is very good, but what it lacks outweighs the pros. I would recommend learning a bit more about the poet and the reasons for him writing the poems as this shows external, independent research has been carried out and this is what they examiners love to see.

The Level of Analysis quite sporadic and where it is invested on little more than simple comment it becomes very superficial. The candidate quite often just talks about what Heaney is describing in his poems, without relating back to the question about the main theme or why it is the main theme. There is very little effective comparison between the poems but what is evident suggests that the candidate, if given more time to flesh out their ideas, could provide a much better answer. I would advise that more time is taken to ensure this candidate has commented less on what the poems are about, but how the use of poetic devices like structure (e.g. - sonnet form, enjambment, stanza length) and language (e.g. - Personal Address, specialist language, narrative form).

The Quality of Written Communication here is good. There is a clear, well-informed use of the English language and the candidate maintains all standards expected of a GCSE level candidate. A number of challenging terminological lexes are spelt correctly and the candidate demonstrate a sound knowledge of grammar and punctuation. It would improve the answer though, to see more of a variety of punctuation (colons, semi-colons) because this shows that there is a confident writer behind this essay with the use of more complex punctuation.