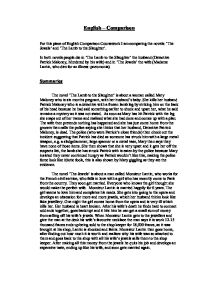 For this piece of English Comparison Coursework I am comparing the novels: 'The Jewels' and 'The Lamb to the Slaughter'.

English - Comparison For this piece of English Comparison Coursework I am comparing the novels: 'The Jewels' and 'The Lamb to the Slaughter'. In both novels people die in 'The Lamb to the Slaughter' the husband (Detective Patrick Maloney, Murdered by his wife) and in 'The Jewels' the wife (Madame Lantin, who dies for an illness: pneumonia). Summaries The novel 'The Lamb to the Slaughter' is about a woman called Mary Maloney who is six months pregnant, with her husband's baby. She kills her husband Patrick Maloney who is a detective with a frozen lamb leg by striking him on the back of his head because he had said something earlier to shock and upset her, what he said remains a mystery as it was not stated. As soon as Mary has hit Patrick with the leg she snaps out of her trance and realised what she had done and comes up with a plan. The wife then pretends nothing has happened and she has just come home from the grocers then calls the police saying she thinks that her husband, Detective Patrick Maloney, is dead. The police (who were Patrick's close friends) then check out the incident suggesting that Patrick has died as someone has struck him with a large metal weapon, e.g. a sledgehammer, large spanner or a metal vase, Mary then says they have none of those items. ...read more.

'The Lamb to the Slaughter' uses a defence for Mary Maloney: "The violence of the crash, the small table overturning, helped her bring her out of the shock." The writer may have defended Mary to make her look as an upset wife and instead of making her sound like a crazy psycho. The second Detail in the Stories is Betrayal, this is not a big point in the stories and does go unnoticed but if you read between the lines it plays a big part in both stories. In 'The Jewels' the betrayal takes place when Latin sells off the jewels of his dead wife for his own income: "I have... have some other jewels which have come to me from... from, the same legacy (money left from someone in a will). Would you care to buy them from me too?" This quote tells me, as the reader, that Monsieur Lantin would rather have money to pay off people he owes money too, than keep the jewellery as a remembrance of his dead wife. In 'The Lamb to the Slaughter' the betrayal takes place when Mary kill's her husband, Patrick, with a frozen lamb leg (hence the name of the novel): "Mary Maloney simply walked up behind him and without any pause she swung the big frozen leg of lamb high in the air and brought it down as hard as she could on the back of his head" This quote tells me, as the reader, that Mary killed her husband ...read more.

In 'The Jewels' Lantin may think that his wife was having an affair since she was bringing home priceless jewels when she came from the opera, as she told her husband that she had only brought fake jewels as she preferred them more to real ones: "But in that case was it a present! A present! But a present from whom? And why is it given to her?" This quote tell me, as the reader that Lantin feels shocked and is suspecting that his wife was having an affair with a richer person than him. And she might not have been going to the theatre but to see a richer man who she might have been having an affair with and getting expensive presents from. Conclusion The main comparison I found between both of the stories is death, they both revolve around a dramatic setting on both deaths, which makes the reader feel sorry for the characters who died. Both deaths are extremely different. Latains wife dies of a natural death where Patrick Maloney is struck on the head by a lamb leg. In my opinion I found the lamb to a slaughter killing more interesting although the author wrote very little lines the author made the story more to my entertainment using a humour based text. . In 'Lamb to the Slaughter' the police are also very unprofessional. In 'The Jewels' it has a dramatic sense too it which is basically a man who loves his wife and looses here because of her interests to go to the theatre no matter what the weather is like. By Junaid Ahmad ...read more.