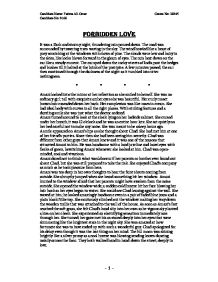 Forbidden love It was a Dark and stormy night, thundering rain poured down. The road was surrounded by towering trees waving in the sky. The wind howled like a beast of prey scratching at the windows with claws of pine. The clouds were low and hairy in the skies, like locks blown forward in the gleam of eyes. The rain beat down on the car like a steady current. The car sped down the rocky streets of India past the hedges and bushes till it halted at the brink of the precipice. A few minutes passed, the car then continued through the darkness of the night as it tumbled into utter nothingness. * * * * Amani looked into the mirror at her reflection as she smiled to herself. She was no ordinary girl; tall with exquisite amber eyes she was beautiful. Her curly russet brown hair cascaded down her back. Her complexion was like roses in cream. She had ideal body with curves in all the right places. With striking features and a dazzling smile she was just what the doctor ordered. Amani turned around to look at the clock lying on her bedside cabinet. She cursed under her breath, it was 12 o'clock and he was an entire hour late. She sat quietly on her bed careful not to make any noise. She was meant to be asleep hours ago. A smile appeared on Amani's lips as she thought about Chad. She had met him at one of her friend's parties. Since then she had been seeing him secretly. Chad was different from other guys that Amani knew and it was one of the reasons that attracted Amani to him. He was handsome with a hard jaw line and hazel eyes with flecks of green, bewitching Amani whenever she looked at him. Chad was open-minded, cool and vivacious. Amani dared not to think what would occur if her parents or brother ever found out about Chad, but she was still prepared to take the risk. ...read more.

The strong and unpleasant smell of the car was getting to her. The roads were bumpy and dusty and the car was awfully stuffy and hot. Amani was relieved and contented when the car finally halted. They all got out of the car and were standing before a white marble house. The village was deserted with only a few straw thatched huts here and there. The white house stood out like a diamond among pebbles. Amani was comforted to discover that they would be staying in the house and not in the broken down huts near by. She was shown her room and then left alone. Her hopes were lifted at the sight of her room in which she would most likely be spending the majority of her time. The room was big with a double wooden bed in the middle. There was a huge matching wooden cupboard against the wall with a small straw thatched beside it. Not in the mood to unpack yet she decided to wonder around. Amani walked out onto the small balcony attached to her room. She breathed in the air which smelt fresh as a cool breeze swept past her. The view from the balcony was spectacular. She could see a clear blue river surrounded by beautiful trees. Amani made her way downstairs towards the back of the house. Just a short stone's throw from the back door stood the banks of the beautiful River Sharwana. The Dhok trees with drooping branches gently caressed the water like a child experimenting with water, for the very first time. There was also a huge Chila tree. Its smooth green leaves were crowded at the end of the branches. Its bark was of a whitish colour. The tree looked sensational with a riot of orange and red blossoms covering the entire crown and looking truly like a tree aflame. There were reeds that gave homes to many other forms of wildlife. ...read more.

She rushed to her balcony and looked outside, it was beginning to rain, but the back garden was deserted. Amani threw out the rope of scarves as she firmly tied one end to the balcony door. She grabbed her father's keys and cautiously climbed down the rope. She could feel her glass bangles cut into her but she had no time to waste. As soon as she reached the ground she crept through bushes not wanting to be seen by anyone. It took Amani some time to find her father's car since the road was full of parked cars. She waited until the coast was clear before she hurried to the car. Amani started the engine, it had been some time since she had last driven a car but she did not care. She took one last look at the house before she drove off. The rain was beating down much harder, tears streamed down her cheeks. Amani could not believe what she was doing but it had all gone too far for her; she would not have to worry anymore, soon she was going to be away from all the misery and hurt that she could no longer bear... As she was driving she smiled when she saw the 'NO ENTRY' sign ahead and drove past it...she was free... free from everything. * * * * He was in the lecture room but his mind was else where, Chad stared at the teacher droning on. His marks had dropped during the past month since he could no longer concentrate. His life had changed drastically without Amani. A cave of loneliness had opened up inside him as Amani's image flashed through his mind. Every night as he lay awake in his bed he thought about her, did she marry someone? Was she happy? He remembered her smile, her eyes and most of all her touch. Was their love a forbidden love or had he lost his love..? ?? ?? ?? ?? Candidate Name: Fatima Ali Omar Centre No: 28345 Candidate No: 0168 - 1 - ...read more.