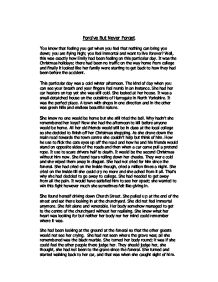 Forgive But Never Forget. You know that feeling you get when you feel that nothing can bring you down; you are flying high; you feel immortal and want to live forever? Well, this was exactly how Emily had been feeling on this particular day. It was the Christmas holidays; there had been no traffic on the way home from college and finally it looked like her family were starting to get back to how they had been before the accident. This particular day was a cold winter afternoon. The kind of day when you can see your breath and your fingers feel numb in an instance. She had her car heaters on top yet she was still cold. She looked at her house. It was a small-detatched house on the outskirts of Harrogate in North Yorkshire. It was the perfect place. A town with shops in one direction and in the other was green hills and endless beautiful nature. She knew no one would be home but she still tried the bell. Why hadn't she remembered her keys? Now she had the afternoon to kill before anyone would be home. All her old friends would still be in class at the local college so she decided to finish off her Christmas shopping. As she drove down the main road towards the town centre she couldn't help but think of him. How he use to flick the cats eyes up off the road and how he and his friends would stand on opposite sides of the roads and then when a car came pull a pretend rope. ...read more.

" This is George" was all the information given on that day, but from the moment he gave her that birthday kiss on the cheek she knew there was something about him. From then on she would find excuses to hang out with her "cool" older brother and in time Charlie had accepted this. They became more like friends than brother and sister but the protective streak every big brother has over his little sister was still there. So, when Charlie found out about Emily and George's relationship, he beat George up. He grew to accept it though and in time they were often on double dates and just hanging out together. But now in place of the guy she had fallen for, was a morose ill-looking thing. " Sit down again". He slowly walked back to the bench and sat down next to where she had placed herself. Neither spoke but words were not necessary. He could tell that she was confused and she knew he was sorry for what he did. She wanted to hold him and tell him she still loved him but on the other hand she wanted to tell him how much she still hated him. During this silence she noted to herself the difference in his outward appearance. His clothes were old and torn, and there were no top of the range trainers, but instead old battered ones that were falling apart. ...read more.

She didn't say anything but just hugged him. It was if she was talking to him through brain waves. She was telling him to remember the good times. He remembered the time they went down to London together, all three of them and he had brought Charlie and Emily both matching chains in Tiffany's. He could still remember what Charlie had said that evening. "Friends till death do us part and then forevermore". That was there saying. He pulled his sleeve up to see the chain that Charlie and Emily had got him in return for Christmas one year. He had had the saying engraved on the back. Emily broke away from the hug and looked at the chain. She suddenly took her bag and pulled out her chain. They looked at each other; they looked at the chains and smiled. Emily reached into her bag once more and pulled out Charlie's chain. She walked over to the grave and buried it in a shallow hole. She took Georges hand and they sat there both looking at the grave. The three of them were back together. Emily sat there crying, not caring who saw them this time. Charlie had won but she didn't care, He deserved it. She stood up and pulled George up with her. "Best friends till death do us part and then forever more" she recited. She leant down and kissed the headstone. "Merry Christmas big brother, we'll all be together again one day, see you then!" she whispered and walked off hand in hand with George. She had forgiven George but she will never forget. ...read more.