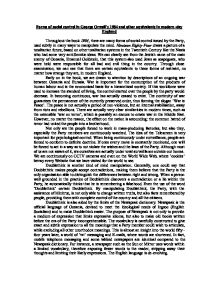 Forms of social control in George Orwell's 1984 and other equivalents in modern-day England.

Forms of social control in George Orwell's 1984 and other equivalents in modern-day England Throughout the book 1984, there are many forms of social control issued by the Party, used subtly in many ways to manipulate the mind. Nineteen Eighty-Four draws a picture of a totalitarian future, based on other totalitarian systems in the Twentieth Century like the Nazis who had some very anti-Semitic ideas. We can clearly see from the Jewish name of the main enemy of Oceania, Emanuel Goldstein, that this system also used Jews as scapegoats, who were held were responsible for all bad and evil thing in the country. Through close examination, we can see that there are certain equivalents to these forms of restraint, no matter how strange they are, in modern England. Early on in the book, we are drawn to attention by descriptions of an ongoing war between Oceania and Eurasia. ...read more.

Not only are the people forced to work in mass-producing factories, but also they, especially the Party members are continuously watched. The idea of the Telescreen is very important for psychological control. When being continuously under surveillance, people are forced to conform to definite doctrine. If ones every move is constantly monitored, one will be forced to act in a way as to not violate the wishes and the laws of the Party. Although most of us are not aware of it, we ourselves are actually under total surveillance outside our homes. We are continuously on CCTV cameras and even on the World Wide Web, where 'cookies' betray every Website that we have visited for the world to see. Doublethink is another kind of mind manipulation. Generally, one could say that Doublethink makes people accept contradictions, making them believe that the Party is the only organisation able to distinguish the differences between right and wrong. ...read more.

This is almost an insight into the world fifty-four years later, a world of 'txt' messaging and E-mails, where words are shortened. In fact, mobile telephone messaging and some tabloid newspapers are identical compared to the Newspeak dictionary. For instance, a newspaper such as the Sun or Mirror uses words within a limited vocabulary, therefore exposing fewer words to the reader, stripping away their thoughts and limiting their likely expressions. The English language is de-evolving. Although these are just a few of the social controlling methods shown in the book 1984, we can see just how analogous these are compared to the world of the Twenty-first Century. One would realise exactly how much we are under the control of the government if they take over tabloid newspapers and television; they could turn England into a totalitarian system like 1984, devoid of free thought and knowledge, making us unable to be truly free. ...read more.