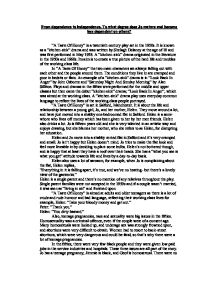 From dependence to independence. To what degree does Jo mature and become less dependant on others?

From dependence to independence. To what degree does Jo mature and become less dependant on others? "A Taste Of Honey" is a twentieth century play set in the 1950s. It is known as a "kitchen-sink" drama and was written by Shelagh Delaney at the age of 18 and was first performed in May 1958. A "kitchen-sink" drama originated in the literature in the 1950s and 1960s. Its aim is to create a true picture of the hard life and troubles of the working class life. In "A Taste Of Honey" the two main characters are always falling out with each other and the people around them. The conditions they live in are cramped and poor in bedsits or flats. An example of a "kitchen-sink" drama is in "Look Back In Anger" by John Osborne and "Saturday Night And Sunday Morning" by Alan Sillitoe. Plays and dramas in the fifties were performed for the middle and upper classes but then came the debut "kitchen-sink" drama; "Look Back In Anger", which was aimed at the working class. A "kitchen-sink" drama play uses everyday common language to reflect the lives of the working class people portrayed. "A Taste Of Honey" is set in Salford, Manchester. It is about the life and relationship between a young girl, Jo, and her mother, Helen. They move around a lot, and have just moved into a shabby one-bedroomed flat in Salford. Helen is a semi-whore who lives off money which has been given to her by her men friends. Helen also drinks a lot. Jo is fifteen years old and she is very talented in an artistic way and enjoys drawing, but she blames her mother, who she refers to as Helen, for disrupting her education. ...read more.

She wants to leave school and start working as soon as she can. This shows that she acts older than she really is and is mature for her age. In scene 2, we are introduced to Jo's boyfriend. In this part of the play, we know him as "Boy", but later on we find out his name is Jimmie. He is a black sailor in the navy and he asks Jo to marry him. Boy is twenty-two, and Jo lies about her age and tells him she is eighteen. He questions her about what Helen will think about him because he's a coloured boy. Boy: "She hasn't seen me." Jo: "And when she does?" Boy: "She'll see a coloured boy." I think Boy is worried about meeting Jo's mother, as racial prejudice was a big issue in the fifties. Jo tells him, though, that her mother is not prejudice and will not mind, but at the end of the play when Helen finds out that the baby will be black, she starts to get mad. When she finds out, she says, "Oh don't be silly Jo. You'll be giving yourself nightmares." She thinks Jo is pulling her leg but she is serious. When she finally realises that it is true, she doesn't care what people will think of Jo, but what people will think of herself. "Can you see me wheeling a pram with a... Oh my God, I'll have to have a drink." Boy has to go away for six months, and he reassures her he'll be back. I think Jo 'thinks' she loves Boy, but doesn't expect him to return, because when he says he is going, Jo says her "Heart's broke". ...read more.

At the end of the play, Helen tries to hint that she wants Geof to leave so she can move back in. she thinks she could look after Jo better than Geof, even after the months she has missed. "There wouldn't be much room for two of us on the couch, would there?" The only hint of love from Helen for Jo throughout the play is when Jo is having contractions and Helen strokes her hair, saying everything will be all right. This is the only time in the play when Helen is shown to be supportive of Jo. It shows Jo is independent and has matured, because when Helen doesn't know how to use the stove, Jo tells her, whereas this time last year, it was the other way around. When Geof leaves, and Helen finds out about the baby being black, she says she's going for a drink. This part reflects the beginning, when Helen abandons Jo at Christmas. Unfortunately just when Jo needs her mother the most, she leaves her yet again. When she's out the door, Jo leans against the doorpost, remembering the good times with Geof and smiling to herself, as she recites a rhyme that Geof taught her. This shows that she is now dependant on herself, and knows she can cope by herself, because she was left alone the year before, and knows she can do it again. Jo's "Taste Of Honey" was when she met Jimmie, but in my opinion, I think her "Taste Of Honey" was the time she spent with Geof, because he taught her a lot of things in life, and throughout the play you can see how she has matured, and adopted a more serious attitude towards life. ...read more.