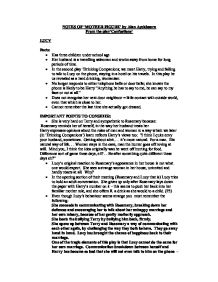 From the play 'Confustions' - notes of 'Mother figure'.

NOTES OF 'MOTHER FIGURE' by Alan Ayckbourn From the play'Confustions' LUCY Facts: * Has three children under school age * Her husband is a travelling salesman and works away from home for long periods of time. * In the second play 'Drinking Companions; we meet Harry, trying and failing to talk to Lucy on the phone, staying in a hotel on his travels. In this play he us revealed as a hard drinking, womaniser. * No longer responds to either telephone bells or door bells; she knows the phone is likely to be Harry "Anything he has to say to me, he can say to my face or not at all." * Does not recognise her next door neighbour = little contact with outside world, even that which is close to her. * Cannot remember the last time she actually got dressed. IMPORTANT POINTS TO CONSIDER: * She is very hard on Terry and sympathetic to Rosemary because: Rosemary reminds her of herself, in the way her husband treats her Harry expresses opinions about the roles of men and women in a way which we later (in 'Drinking Companions') ...read more.

a drink as she would to a child. (P5) * Even though Lucy's behaviour seems strange you must remember the following: She succeeds in communicating with Rosemary, breaking down her defences and encouraging her to talk about her unhappy marriage and her own misery, because of her gently motherly approach. She beats the bullying Terry by bullying him back, firmly. She opens up between Terry and Rosemary a way of communicating with each other again, by challenging the way they both behave. They go away hand in hand. Lucy has brought the chance of happiness back to their marriage. One of the tragic elements of this play is that Lucy cannot do the same for her own marriage. Communication breakdown between herself and Harry has become so bad that she will not even talk to him on the phone - this is almost a metaphor for the breakdown of their marriage. ...read more.

Often looks off to the door to upstairs and appears to be listening. Rarely makes eye contact with anyone - so that on the odd occasions that she does, the impact is great, both on the other character and the audience e.g. P4 "Phone call?". . . "Harry?"P11 "What's the matter with Rosemary?" * Gestures: runs her hand through her hair; takes stuff out of her pockets stares at it blankly, and shoves it back; stands with one hand on the back of her hips; touches her own face (do I really still exist?); taps her foot in impatience/annoyance. Motherly gestures towards Terry and Rosemary: Ruffles their hair; smooths their hair; tucks in their labels; wipes dribbles of imaginary orange or milk from their faces; pats seats where she wants them to sit; pushes a toy into their arms to calm/comfort/distract them. Generally touches them in ways one adult does not touch another eg P15 takes Terry's chin firmly in her hand, looks deep into his eyes and says " You try. You just dare try, my boy." ...read more.