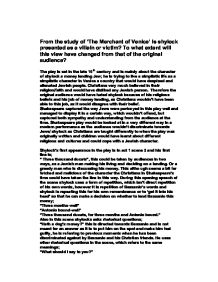 From the study of &amp;#145;The Merchant of Venice&amp;#146; is shylock presented as a villain or victim? To what extent will this view have changed from that of the original audience?

From the study of 'The Merchant of Venice' is shylock presented as a villain or victim? To what extent will this view have changed from that of the original audience? The play is set in the late 15th century and is mainly about the character of shylock a money lending Jew; he is trying to live a simplistic life as a simplistic character in Venice a country that would have despised and alienated Jewish people. Christians very much believed in their religion/faith and would have disliked any Jewish person. Therefore the original audience would have hated shylock because of his religious beliefs and his job of money lending, as Christians wouldn't have been able to this job, as it would disagree with their belief. Shakespeare captured the way Jews were portrayed in this play well and managed to display it in a certain way, which wouldn't offend, but captured both sympathy and understanding from the audience at the time. Shakespeare play would be looked at in a very different way in a modern performance as the audience wouldn't discriminate towards Jews/ shylock as Christians are taught differently to when the play was originally written and children would have learnt about different religions and cultures and could cope with a Jewish character. Shylock's first appearance in the play is in act 1 scene 3 and his first line is; " Three thousand ducats", this could be taken by audiences in two ways, as a Jewish man making his living and deciding on a lending. ...read more.

He also mentions the way he has been bullied and picked on by the Christians and Antonio. "Laughed at my losses, mocked at my gains" this is a key quote from shylock which explains how he has been treated, this would make the audience feel sympathetic toward shylock and judge Christians on the way they have been treating another person. However shylock would make an audience feel even more sympathetic with his famous plea for equality, "I am a Jew, hath not a Jew eyes? Hath not a Jew hands, organs dimensions, senses, affections, passions, fed with the same food, hurt with the same weapons!" shylock is trying to say that they are the same as one another and the only difference is their religions and the beliefs that are involved with the following of them. Shylock would be known as a victim in this scene because Shakespeare uses comparisons of a Jew to the devil, "unless the devil himself turned Jew", shylock also uses repetition of the word "there" in this scene to show the persons position and shylock seems to be annoyed that there is no news from his daughter. However he turns into more of a villain later on in the scene when he talks about his daughter In a very different way, he starts to become more selfish and even says he would like her dead, "I would my daughter were dead at my foot" he now cares more about his ...read more.

The one thing that Shylock cares for more than anything will now be taken from him if he takes his justified revenge. The tables are now turned, with Venetian law saying that a penalty must be paid by an alien attempting to murder a Venetian. Still Shylock is classed as an alien in his home. Shylocks possessions are confiscated because of the attempted murder of Antonio. Antonio now makes two conditions for his life: firstly he must become Christian, and, secondly, he must make a will leaving all of his possessions to Jessica and Lorenzo. So without his revenge, wealth, and his daughter, now he is alienated from his fellow Jews. Ironically he is left alone with nothing but what ruined him; his new found Christianity. My view of shylock in this play is that he is a sly character that can be portrayed as both a villain and a victim. He comes across in many different ways during the play and uses various types of language. He is seen as a villain in most parts of the play and those of which he isn't he is reversed later on referring to them and being villainous towards them. In the time the play was written the audience would have seen him as a villain no matter what he was doing as they would of disapproved of his religion and beliefs. In modern day performances audiences would not label him as a villain until the end of the play when his true villainous side is revealed. ...read more.

*****
A detailed description of the experiment with good use of specific and precise biological terminology throughout.