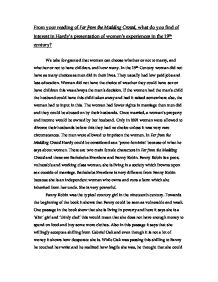 From your reading of Far from the Madding Crowd, what do you find of interest in Hardys presentation of womens experiences in the 19th century?

From your reading of Far from the Madding Crowd, what do you find of interest in Hardy's presentation of women's experiences in the 19th century? We take for granted that women can choose whether or not to marry, and whether or not to have children, and how many. In the 19th Century woman did not have as many choices as men did in their lives. They usually had low paid jobs and less education. Woman did not have the choice of weather they could have sex or have children this was always the man's decision. If the women had the man's child the husband could have this child taken away and had it raised somewhere else, the woman had to input in this. The woman had fewer rights in marriage then men did and they could be abused on by their husbands. Once married, a woman's property and income would be owned by her husband. Only in 1891 woman were allowed to divorce their husbands before this they had no choice unless it was very rare circumstances. The men were allowed to imprison the women. In Far from the Madding Crowd Hardy could be considered as a 'proto-feminist' because of what he says about women. There are two main female characters in Far from the Madding Crowd and these are Bathsheba Everdene and Fanny Robin. ...read more.

This person was Fanny Robin. Fanny had not been mention in the book for many chapters and no one had seen her for a period of time. When they saw poor Fanny they stopped and familiarized with each other. This caused problems between Bathsheba and Troy. Bathsheba then rides alone in the carriage while Troy walks. This could symbolize their futures. Troy has no consideration for women's feelings; you can tell this by when he is wasting away Bathsheba's and his money on gambling. After this he shows that he has realized that he has faulted and he offers to help Fanny when she tells him that she has no money. Troy then gives some money to Fanny and then soon after promises her that he will help her in the future. This is normal in the nineteenth century for women to be relying on the man for their money and upbringing. Fanny's journey to Casterbridge in Chapter 40 brings the reader to feel sorry for her and have sympathy for her. Hardy uses pathetic fallacy to show her suffering and the poor conditions she is in. 'Now there was not a rustle, not a breeze, not the faintest clash of twigs to keep her company'. This shows that she is exhausted and lonely. ...read more.

Oak was very impressed by the way she rode the horse. While riding the horse it says that she 'drops backwards flat upon the pony's back, her head over its tail, her feet against its shoulders and her eyes to the sky' Towards the end of the chapter Bathsheba yet again amazes Gabriel Oak by rescuing him from his smoke filled hut. He wakes up on her lap; usually it would be the other way round and the man would have saved the woman. 'The young girl with remarkably pleasant lips and white teeth was beside him. More than this - astonishingly more his head was upon her lap, his face and neck were disagreeably wet, and her fingers were unbuttoning his collar.' This sort of quote was unusual for the nineteenth century because in novels they would never discuss anything sexual as they thought it was a very wrong. After Bathsheba saves Oak she says that it was 'foolish' of him to leave his hut while there was a fire in it. No woman would usually say this to a man in the nineteenth century because the man was always in charge and so he would not have liked to be told what was right and what was wrong. ?? ?? ?? ?? ...read more.