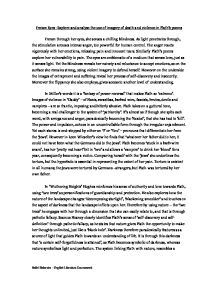 Frozen Eyes -Explore and analyse the use of imagery of death and violence in Plath's poems Frozen through her eyes, she senses a chilling blindness. As light penetrates through, the stimulation arouses intense anger, too powerful for human control. The anger reacts vigorously with her emotions, releasing pain and innocent tears. Similarly Plath's poems explore her vulnerability to pain. The eyes are emblematic of a medium that senses love, just as it senses light. Yet the blindness reveals her naivety and reluctance to accept emotions, as on the surface she remains strong, using violent imagery to defend herself. However on the underside the images of entrapment and suffering reveal her process of self-discovery and insecurity. Moreover the flippancy she also employs, gives access to another level of understanding. In Miller's words it is a 'fantasy of power reversal' that makes Plath so 'extreme'. Images of violence in 'Daddy' - of Nazis, swastikas, barbed wire, fascists, brutes, devils and vampires - are so frantic, imposing and bitterly abusive. Plath takes on a guttural tone, becoming a real challenger to the system of 'patriarchy'. It's almost as if though she spits each word, with arrogance and anger, paradoxically becoming the 'Fascist', that she has had to 'kill'. The power and impulsion, echoes in an uncontrollable form through the irregular enjambment. Yet each stanza is end-stopped by either an 'I' or 'You' - pronouns that differentiate her from the 'Jews'. ...read more.

Al Alvarez's psychoanalytic view examines how Plath gains 'an identity' through her suffering, and the 'strategy' she employs, to manipulate her anger into something greater. This 'strategy' is something that Brian Keenan employs in 'An Evil Cradling'. Keenan's inner-self struggles to come to terms with the outside of his prison cell. Whereas we normally inhabit two interacting worlds, that of inside/outside; mental/physical - Keenan as well as Plath inhabits three. The third is the 'cell' and 'bottle', in which entrapment is endured. This is reinforced in the symbolism of the 'eyes', - the 'stupid pupil'. The bitter 'ou' and 'i' sounds in the assonance of the 'stupid pupil', suggest Plath's verbal effort to fuse the two words into something more meaningful and evocative. It's almost like twisting her tongue, becoming entangled and out of control. Similarly in Sujata Bhatt's 'Search For My Tongue', the idea of her 'tongue in knots', emphasizes her entrapment as she shows her clash between two different identities and cultures. Viewing Plath's entrapment through this perspective shows the physical entrapment that Plath suffers through her own organs. Psychologically functioned, the 'eyes' normally choose to close whenever they like, but Plath's 'eyes' have to 'take everything in', as subconsciously she is already out of control. Hughes incorporates this idea in 'Red', as Plath becomes 'wrapped around' with 'blood. ...read more.

The pivotal point occurs when the 'sky' leans on her. In my opinion I think that the grass personifies Plath, because it stands 'upright', and the idea of the grass being able to reach as high as the sky is an intensifying moment. Theoretically this is impossible, but through this visual aid she shows that it is impossible for her to reach high in life, perhaps because she is 'too delicate'. Her vulnerability exposes her to pain and 'torn' firstly by 'brutality' she makes herself the prisoner, by being situated in constricted 'narrow' 'valleys'. Therefore she is easily put off from succeeding because before even trying, she feels it is impossible to achieve. As a result the rest of her pain and oppression takes the form of violence, by releasing anger through images that paradoxically comfort her. Just as 'dying is an art', poetic imagery too has it's own 'art'. This 'art' is the desire to become wild and creative, but still realistic of the issues surrounding life. Such as Plath's violent image- a 'self-justifying purpose' that simply fulfills her 'intense personal need'. Yet Stan Smith conversely states that she 'found a voice', only 'by the precise historical experience from which it emerged'. Differentiating both, I conclude to say that Plath's individual 'force', can be independent of Marxist, Feminist or Psychoanalytic views because she had her own 'voice', 'taste' and even 'fear' at times, to express what her poetic imagery of violence truly represented - an 'art' of 'dying'. ?? ?? ?? ?? Salini Balendra - English Literature Coursework ...read more.