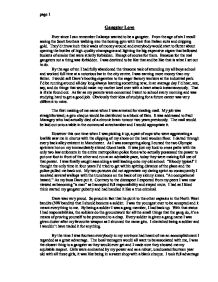 Gangster Love Ever since I can remember I always wanted to be a gangster. From the age of six I recall seeing the Scott brothers walking into the boxing gym with their fine Italian suits and dripping gold. They'd throw inch thick wads of money around and everybody would start to flutter about opening the bottles of high-quality champagne and lighting the big expensive cigars that bellowed buckets of smoke that were strictly forbidden. Except of course for them. Because for the real gangsters not a thing was forbidden. I was destined to be like that and be like that is what I set out to do. By the age of ten I had fully abandoned the tiresome task of attending my all boys school and worked full time at a notorious bar in the city centre. I was earning more money than my father. I would sell Dave's bootleg cigarettes to the eager factory workers at the industrial park. I'd be running around all day long always learning something new, in an average day I'd hear, see, say, and do things that would make my mother keel over with a heart attack instantaneously. That is if she found out. As far as my parents were concerned I went to school every morning and was studying hard to get a good job. Obviously their idea of studying for a future career was very different to mine. The first making of me came when I was arrested for stealing mail. My job was straightforward; a giro cheque would be distributed to a block of flats. It was addressed to Paul Managey who had actually died of a chronic brain tumour two years previously. The mail would be laid out onto a table in the communal antechamber and I would appropriate it. However this one time when I was picking it up, a pair of cops who were aggravating a lowlife saw me in chorus with the clipping of my shoes on the hard wooden floor. ...read more.

Being a gangster involves killing and only the strongest survived. I pulled the trigger. CLICK not an echoing bang or the spurting blood I had expected. It was replaced with raucous applause. The two scouse captains picked up the hooded man. Whilst the other captains encircled me, as they all patted my back heartily congratulating me on my achievement. Both Dave and Phil kissed me on the cheek. The hooded Bengali was revealed to be a captain from Sheffield a crook called T-bone who obviously liked to try his hand at amateur dramatics. He just stood their grinning from ear to ear and said. "Now why would you wanna kill me Charley." In as sincere a way as possible. I would never look at him the same way again. I was given four soldiers to work under me and they were all older, but I still had ultimate control over them and they had to do as I said. As well as the soldiers I was given a second hand Mercedes, a gang owned apartment on the main council estate in Droylsden where we had a lot of business so I could operate from there and five thousand pounds to set myself up in the area of my choice. My mum was pleased when I moved out as it now meant that I wasn't going to bring any trouble to the family. It did however mean that for several months after that my suits were never as smartly ironed again, a minor downside I know but it was the little things that mattered to me. My soldiers were all good workers, they specialised in car theft and so it seemed only logical that I should start a chop shop with my five thousand. I rented a lock up, bought the tools and waited for the cars to come rolling in. It develop into a very lucrative business. ...read more.

"Gangster love forever." He pronounced pointing his smoking gun to the ceiling above. Without further hesitation he gave us all the look that through our work we had grown to under stand as the epitome of power. He ran full speed at the slowly advancing police shooting intentionally at the moving targets. In true gangster fashion he went out shooting. After his valiant kamikaze act we silently looked to one another with that same look of power and took one deep breath. We stood up with our hands high in the air. The court case was a media frenzy, we were being named the most dangerous villains in the north. Dave had turned informant in order to save his own neck and so supplied enough evidence to convict us all. I was acquitted for the garage murder due to lack of evidence but found guilty of drug smuggling after the customs officers made very damming statements, the guns I had in the house along with a collection of knuckledusters and machetes meant I was found guilty of possession of an illegal fire arm and deadly weapons. I was sentenced to a hefty 16 years in a top security prison in Birmingham. The others were all sentenced for different lengths with Tiger Paul being given the least with just five years, but he was killed in a Manchester prison after a drug deal went sour. T-bone was released a year ago and is reported to be on the straight and narrow, but is still looking for the illusive Dave. All the other are scattered around the country in various prisons. I'm currently still running the tobacco business and selling Polly, except here I have to kick up a percentage to a Turkish mafia boss. I am due for release in two years and intend to regain my title. The media like to call me a ruthless gangster but I don't feel like I made it as far as that. I plan to meet my full potential. I will be the biggest gangster. Gangster love forever! ?? ?? ?? ?? page 1 ...read more.