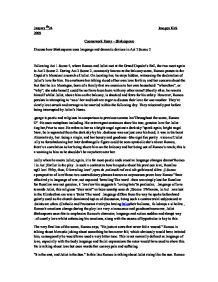 Imogen Kirk 24th January 2009 Coursework Essay - Shakespeare Discuss how Shakespeare uses language and dramatic devices in Act 2 Scene 2 Following Act 1 Scene 5, where Romeo and Juliet met at the Grand Capulet's Ball, the two meet again in Act 2 Scene 2. During Act 2 Scene 2, commonly known as the balcony scene, Romeo passes to the Capulet's Mansion in search of Juliet. On locating her, he stays hidden, witnessing the declaration of Juliet's love for him. He overhears her talking aloud of her own love for him, and her concern about the fact that he is a Montague, born of a family that are enemies to her own household: "wherefore", or "why", she asks herself, could he not have been born with any other name? Shortly after, he reveals himself whilst Juliet, above him on the balcony, is shocked and fears for his safety. However, Romeo persists in attempting to 'woo' her and both are eager to discuss their love for one another. They're clearly love-struck and arrange to be married within the following day. They reluctantly part before being interrupted by Juliet's Nurse. Throughout the scene, Romeo's language is poetic and religious in comparison to previous scenes. His extravagant sentences show his true, genuine love for Juliet. ...read more.

However, during the play she matures emotionally and broadens her ideas and her way of thinking. This vast and rapid change was a consequence of her relationship with Romeo and there are many ideas in the play which illustrate these points but it is through her language that we can see these changes. Prior to meeting him, she is very compliant to elders in her family, and faithful to them. Shakespeare shows this through calling her mother, Lady Capulet, "Madam" in addition to when the Capulet family's nurse calls Juliet, Juliet comes promptly. Then, she politely asks why she was called. Although as the play progresses, and this scene unfolds, it's apparent she's changed emotionally, and her priority is Romeo, finishing conversations with him, before going to see her Nurse, on the Nurse's interruption. Interruptions from the Nurse occur frequently in Act 2 Scene 2, calling Juliet from the balcony, where not to her knowledge, she's with Romeo discussing their future. Not so coincidentally, her Nurse calls at points where they are having serious conversations about their love, which is easily seen as a warning that they're not meant to be. The repetition of interruptions during this scene indicates there's a certain correlation, an effective dramatic device intended by Shakespeare. ...read more.

The dramatic devices, along with stage directions, would be vital in order to engage the audience's attention. Some of the language used has other forms of innuendo or 'hidden meanings' including: "What's a Montague? It is nor hand nor foot, nor arm nor face, nor any other part belonging to a man." This would help to catch the attention of the audience during the Shakespearean era. On parting, prior to the end of the scene, both Romeo and Juliet retire slowly, and reluctantly as Juliet is called by her Nurse. It is therefore obvious they are both love-struck and do not wish to part. Also, beforehand, they had say goodnight more than once "Good night, good night!", "O bless�d, bless�d night!" Romeo is most reluctant to leave Juliet, and her presence. In conclusion, there's a great contrast in the language of both Romeo and Juliet, as a consequence of their own fears in such a hasty new relationship. In general, both characters change when they meet again in Act 2 Scene 2; Romeo's language becoming much more poetic and positive, and Juliet's being more realistic than before whilst at the ball. The forms of dramatic devices used vary for effect, but heavily influence the mood in the play, and the characters feelings. Imagery used such as similes, metaphors and personification contribute to the effect of this scene in particular. ...read more.