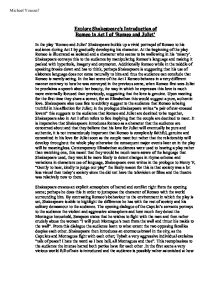 Explore Shakespeare's Introduction of Romeo in Act I of 'Romeo and Juliet' In the play 'Romeo and Juliet' Shakespeare builds up a vivid portrayal of Romeo to his audience during Act I by gradually developing his character. At the beginning of the play Romeo is illustrated as isolated and a character who seems to be wallowing in his 'misery'. Shakespeare conveys this to the audience by manipulating Romeo's language and making it packed with hyperbole, imagery and oxymoron. Additionally Romeo while in the middle of speaking breaks down and has to think, perhaps Shakespeare is suggesting that his use of elaborate language does not come naturally to him and thus the audience can conclude that Romeo is merely acting. In the last scene of the Act I Romeo behaves in a very different manner contrary to how he was conveyed in the previous scene, when Romeo first sees Juliet he proclaims a speech about her beauty, the way in which he expresses this love is much more externally focused than previously, suggesting that the love is genuine. Upon meeting for the first time they share a sonnet, for an Elizabethan this would suggest a pure, authentic love. Shakespeare also uses fate to subtlety suggest to the audience that Romeo is being truthful in his affection for Juliet; in the prologue Shakespeare writes "a pair of star-crossed lovers" this suggests to the audience that Romeo and Juliet are destined to be together, Shakespeare also in Act I often refers to fate implying that the couple are destined to meet. It is imperative that Shakespeare introduces Romeo as a character that the audience are concerned about and that they believe that his love for Juliet will eventually be pure and authentic, it is not tremendously important that Romeo is ...read more.

Shakespeare is perhaps conveying to his audience the turmoil that Romeo is going through and he is able to encapsulate this through the use of antithesis. However in his next speech the audience begin to suspect that he is love is not at all genuine. Romeo tries to make out that the love he feels is authentic; however by manipulating Romeo's language Shakespeare is able to undermine this. The style in which Romeo's speaks becomes very hyperbolic, full of imagery and throughout the monologue he uses rhyming couplets, "Love is a smoke made with the fume of sighs, being purged, a fire sparkling in lovers' eyes. The hyperbole and metaphors in his language illustrate to the audience that Romeo is almost pretending and attention seeking, some might deduce that he enjoys being in emotional turmoil. This is made even more blatant when Romeo in the middle of his speech says, "what is it else?" He breaks down and has to think to get himself back on track and he even breaks his use of iambic pentameter which is very uncommon for Romeo this portrays to the audience that the use of hyperbole and overly poetic language does not come spontaneously or naturally to him; thus the audience can conclude that Romeo is not all genuine in his emotions and he is merely 'acting'. Fr Lawrence later on confirms that Rosaline was merely a childish infatuation rather than true love he says in Act II sc 3 regarding her "for doting, not for loving." Shortly afterwards in Act I sc 2 we learn that Romeo's mystery love is in fact for Rosaline, it is possible that Shakespeare intends to surprise the audience because they are under the presumption that his unknown love is for Juliet. ...read more.

However another view is often taken: some think that it is not necessarily essential that the love they have for each other is completely pure and genuine right from the beginning of their relationship, however it is crucial that their love for one another will develop through the course of the play. The most important thing is that towards the end of the play Shakespeare conveys to the audience a love which is indisputably pure and genuine. In conclusion, Romeo's character develops during the first act; Shakespeare initially portrays him as an isolated individual who almost enjoys wallowing in grief, this is evident to the audience because of the way in which Shakespeare manipulates Romeo's language. He uses poetic devices such as hyperbole, metaphor and antithesis, what makes it clear to the audience that Romeo is merely acting is how he stops to think in the middle of speech. This illustration of a despondent and miserable Romeo continues until near the end of the act. Contrasting the initial impression of him in the last scene of the act the audience observe a different Romeo, although he still possesses some of the character traits that were found in the first scene such as antithesis and exaggeration in his language, his overall disposition has changed. The style in which he expresses his love is much more focused on Juliet rather than himself as observed in the first scene, his temperament is much more joyful than ever before in the act and other elements in his presentation during Act I sc 5 convey this to the audience. The preliminary introduction of Romeo exemplifies to the audience a rather disagreeable character however his temperament slowly becomes more content and by the end of the Act I upon his first sighting of Romeo is portrayed as overjoyed in his new love. ...read more.