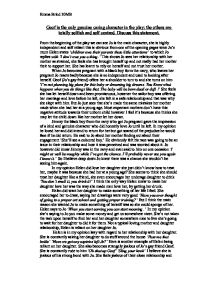 Geof is the only genuine caring character in the play; the others are totally selfish and self centred. Discuss this statement. From the beginning of the play we can see Jo is the main character, she is highly independent and self reliant this

Geof is the only genuine caring character in the play; the others are totally selfish and self centred. Discuss this statement. From the beginning of the play we can see Jo is the main character, she is highly independent and self reliant this is obvious from one of the opening pages were Jo's mum Helen states 'children owe their parents these little attentions' to which Jo replies with 'I don't owe you a thing.' This shows Jo sees her relationship with her mother as strained, she feels she has brought herself up and not really had her mother their to support her. She has learnt to rely on herself and not trust her mother. When Jo becomes pregnant with a black boy form the navy, who leaves her pregnant Jo reacts badly because she is so independent and used to looking after herself. Geof (Jo's gay friend) offers her a shoulder to turn to and she turns on him 'I'm not planning big plans for this baby or dreaming big dreams. You Know what happens when you do things like that. The baby will be born dead or daft!' ...read more.

Here is another example of Helen being reliant on her daughter. She also becomes strangely jealous of Jo's gay friend Geof. She is constantly rude to him 'Oh shut up Geof' 'Sling your hook' I believe she is jealous of his strong bond with Jo. She feels jealous of their close relationship and doesn't like him around as she feels inadequate compared to him. Jo maintains through out the play that she wants to be rid of her mother 'as soon as I get a full-time job, I'm leaving Helen and starting up with a room somewhere' so for Helen to know there's someone in her life she wants there, that person being Geof it must make her feel less important. Even for Helen who shows no real care for her Jo to know that her own daughter feels like that must be difficult. I think part of her feels she should have a close loving relationship with Jo I just don't think she knows how to or more importantly can be bothered. Peter, Helens latest fling who becomes her husband comes across as a decent sort of guy at first, however he is sleazy 'Helen you look utterly fantastic' 'Got your blue garters on?' ...read more.

In my opinion Geof is a very lonely young man he didn't seem to have any other friends besides Jo in the play, other than young man he was found in his flat with but in his own words 'he didn't really know the guy' . We can't really be sure of his past because the play doesn't mention it but I feel he's faced a lot of prejudice about his sexuality and perhaps that is why he so understands Jo. He doesn't seem to have any family, and I think he was trying to make Jo and the baby into a surrogate family for himself. I feel he was the nicest character in the book but he did become quite irritating as he was too nice all of the time. All the other characters had floors and attributes that made them lovable or unlovable. Geof however, was just quite bland. Helen for instance was an interesting character because she was so unpredictable, she could have a new boyfriend at any moment, or get drunk and do something ridiculous. Goef on the other hand was predictable but provided the rock of the story. He was Mr. Reliable that Jo could turn to he wasn't an interesting character like Helen but was a vital part of the play. ?? ?? ?? ?? Emma Brind 10MB ...read more.