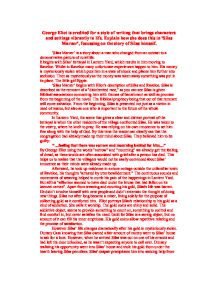 George Eliot is credited for a style of writing that brings characters and settings vibrantly to life. Explain how she does this in &amp;#145;Silas Marner&amp;#146;, focussing on the story of Silas himself.

George Eliot is credited for a style of writing that brings characters and settings vibrantly to life. Explain how she does this in 'Silas Marner', focussing on the story of Silas himself. 'Silas Marner' is a story about a man who changed from an outcast to a demonstrative picture of rural life. It begins with Silas' betrayal in Lantern Yard, which results in him moving to Raveloe. Whilst in Raveloe many unfortunate experiences happen to him. His money is mysteriously stolen which puts him in a state of shock and places him further into seclusion. Then as mysteriously as the money was taken away something was put in its place. The little girl Eppie. 'Silas Marner' begins with Eliot's description of Silas and Raveloe. Silas is described as the remnant of a "disinherited race," as you can see Silas is given Biblical associations connecting him with themes of banishment as well as promise from the beginning of the novel. The Biblical prophecy being that out of that remnant will come salvation. From the beginning, Silas is presented not just as a victim in need of rescue, but also as one who is important to the future of the whole community. ...read more.

He experiences a gradual transformation parallel to the development of Eppie who he begins raising: "As the child's mind was growing into knowledge, his mind was growing into memory". With the changes brought by Eppie, the story of the alienated miser, hardened for self-protection, and cut off from him and others, becomes a story of rebirth. Silas returns to life after a death-like existence. The beginning of the journey to regain his lost self and establish connections with the community is a journey back to love. Silas faces many intrusive characters within the book. First Dunsey who steals his gold leading him further into seclusion and secondly Eppie who brings him out of it. The first sign of Silas' growing involvement in the community was when people began to visit him at his home. Silas began to grow increasingly close with a woman from the village named Dolly. The stage in which his isolation was broken was when he finally cried out he had been robbed and began to let people into his life once more. His first encounter with Dolly was when she invited herself around to his house with a couple of lard cakes, which she had baked the previous day. ...read more.

Life-mysteries such as luck and fate are examined. The contrast between Silas' urban home in Lantern Yard - pushed aside by the Industrial Revolution - and the bustling village of Raveloe, representing an unchanging, personable and rural society, shows Eliot's indifference. Eliot's descriptive style and the fact that she chose to feature in her novel the lives of ordinary labourers makes her, different to other writers. 'Silas Marner' teaches the values of honesty, kindness, and courage. is still quite a drastic, stimulating, vision of the world. Symbols are a key aspect of the novel 'Silas Marner'. Eliot uses them to help develop and intensify the plot of the story. Each symbol represents major themes of the story. Some of the symbols she uses are so discrete; it makes the reader wonder if she meant them to be so. 'Silas Marner' is a well-written book although not of my taste. I would recommend it as it has a well-favoured plot and atmosphere, which surrounds it. Whilst reading it you can get so involved you feel part of the novel, due to the well descriptive technique which Eliot Uses. Whilst reading you get every detail of the surroundings. A clear picture of rural life. A clear understanding of how easily people can become outcasts and how a single mishap can cause a world of good. ...read more.