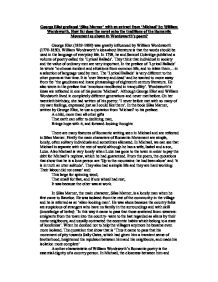 George Eliot prefaced 'Silas Marner' with an extract from 'Michael' by William Wordsworth. How far does the novel echo the traditions of the Romantic Movement as shown in Wordsworth's poem?

George Eliot prefaced 'Silas Marner' with an extract from 'Michael' by William Wordsworth. How far does the novel echo the traditions of the Romantic Movement as shown in Wordsworth's poem? George Eliot (1819-1880) was greatly influenced by William Wordsworth (1770-1850). William Wordsworth's idea about literature is that the words should be used in the language of everyday life. In 1798, he and Samuel Coleridge published a volume of poetry called the 'Lyrical Ballads'. They think that individual in society and the value of ordinary men are very important. In the preface of 'Lyrical Ballads' he wrote 'to choose incident and situations from common life, and to relate them... in a selection of language used by men. The 'Lyrical Ballads' is very different to the other poems at that time. It is 'over literary and dead' and he wanted to move away from the 'the gaudiness and inane phraseology of eighteenth century literature. He also wrote in the preface that 'emotions recollected in tranquillity'. Wordsworth's ideas are reflected in one of his poems 'Michael'. Although George Eliot and William Wordworth lived in completely different generations and never met before. On her twentieth birthday, she had written of his poetry: 'I never before met with so many of my own feelings, expressed just as I could like them'. ...read more.

When he moved to Raveloe, although he was alone, it is more peaceful and quieter than Lantern Yard. He also received help from Dolly Winthrop when he is in difficulty whereas in Lantern Yard his best friend betrayed him. After thirty years he and Eppie returned to Lantern Yard and the place has already been industrialised: 'What a dark ugly place!' and 'How it hides the sky! It's worse than the Workhouse.' Another feature of William Wordsworth's Romantic poetry is the importance of basic truth. In Michael, Michael's life is full of joy and hope when Luke was born but his life would have fall apart when he heard that Luke got into trouble would not be coming back but love keeps him going: There is a comfort in the strength of love; 'Twill make a thing endurable, which else Would break the heart: - Old Michael found it so. When Silas Marner was accused of stealing the money, he said 'God will clear me.' but then he lost in faith in God and soon after in man as he heard that his fianc�e is marrying to his best friend: 'poor Marner went out with that despair in his soul- that shaken trust in God and man, which is little short of madness to a loving nature'. ...read more.

Although money is seen as a friend to Silas Marner in the beginning of the story, it was later seen as an object that kept his thoughts in an ever-repeated circle, leading to nothing beyond itself. There are a lot of natural imagery being used in both Michael and Silas Marner. In Michael, an example of natural imagery being used is 'light to the Sun., and music to the wind'. In Silas Marner, natural imagery is used more frequently than in Michael: 'he seemed to weave, like the spider, from pure impulse, without refection' and 'his life has shrunk away, like a rivulet that has sunk far down from the grassy fringe of its old breadth into a little shivering thread' and so on. I think the purpose of using natural imagery is to emphasis the nature and countryside life's superiority over town life. Both William Wordsworth's Michael and George Eliot's Silas Marner have many similar features such as the importance of a child and countryside life, even though they were written in two different generation and the two authors had never met each other before. The quotation that links between Wordsworth and George Eliot can be found in the preface of Silas Marner: A child, more than all other gifts That earth can offer to declining man, Brings hope with it, and forward-looking thoughts ...read more.