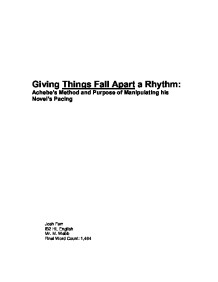 Giving Things Fall Apart a Rhythm: Achebe's Method and Purpose of Manipulating his Novel's Pacing Josh Farr IB2 HL English Mr. M. Webb Final Word Count: 1,464 The perception of time in Things Fall Apart is governed by the lives and actions of the people it affects. Only after reading all three sections of the novel do we realize the various methods in which Achebe alters time's pace to support the tone of his narrative. As the story progresses, Achebe manipulates time with greater intensity. In doing this, he envelops his readers with a view of how quickly and easily a culture can be destroyed by Imperialism, and thus reinforces the underlying themes of this novel. Achebe meters the narrative as it would seem to Okonkwo, the story's greatest victim of the White insurgence into Umuofia. By examining time and how it affects Okonkwo in Things Fall Apart, the novel's title's meaning becomes more profound than it could be without this perspective, and we reach a greater understanding of Achebe's message. Part I of Things Fall Apart, arguably an extensive exposition to the book's conflict, dominates the novel in terms of length. Surprisingly, although Part I is the longest section of the book, it does not accomplish much in terms of plot progression or character development, but rather provides the reader with a detailed overview of Igbo life. ...read more.

The second chapter of Part II begins with, "...in the second year of Okonkwo's exile." (Achebe 96) By this point, the rhythm of Things Fall Apart is defined only by the narrator's mention of it. By doing this, Achebe dispenses with the soothing background rhythm of his hero's mundane yet satisfactory existence in Umuofia, and introduces instead a more formless tempo punctuated only by significant events, like the visit of Okonkwo's friend, Obierika. During this moment of familiarity for Okonkwo, the novel's cadence slows again to that of Part I, and the dialogue accordingly returns to its former roundabout style. Uchendu recites a long fable about Mother Kite sending her daughter to bring food for dinner simply to make the point that it is unwise to trust someone who says nothing. (Achebe 98) By reverting to a high level of conversational detail in this part of the novel, Achebe establishes a correlation between the pace of Things Fall Apart and Okonkwo's comfort level. Thus, we understand that time is an indicator of regularity; and when it changes, Okonkwo's world changes too. By the time we come to Part III, we learn indirectly that much has changed in Umuofia since the White man's arrival. ...read more.

Part III throws the reader abruptly into the fragmenting world of the Igbo. Achebe is able to evoke shock from the reader by manipulating the narrative's pace. In limiting any superfluous language from the section, the reader is left with a "black and white" illustration of Okonkwo's dying world. After he alters his beat in complexity and intensity over one hundred and twenty pages, Achebe leaves his readers in the confusion of silence for Part III. There is no specific mention of any type of noise for the final two chapters of Part III since this is the time in which Okonkwo impulsively decides his own destiny and eventually meets his end. "The only noise [the District Commissioner and his men ] made," as they approached Okonkwo's final resting place, "was the sound of their feet as they crushed dry leaves." (Achebe 146) It is here in a sprawling vacuum of chaos that we truly understand the meaning of the novel's title. By comparing the pace of Umuofia from a traditional Nigerian village to its later existence as a White colony, the disparity is as conspicuous as the pace of a metronome whose timing weight has slipped from legato to allegro. When this transformation occurs, the reader fully understands how the defining boundaries of Okonkwo's life disintegrated, destroying his own world's metronome and sealing his inevitably tragic fate. ?? ?? ?? ?? 1 ...read more.