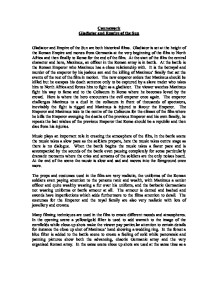 Gladiator and Empire of the Sun.

Coursework Gladiator and Empire of the Sun Gladiator and Empire of the Sun are both historical films. Gladiator is set at the height of the Roman Empire and moves from Germania at the very beginning of the film to North Africa and then finally to Rome for the end of the film. At the start of the film the central character and hero, Maximus, an officer in the Roman army is in battle. At the battle is the Roman Emperor who Maximus has a close relationship with. It is the betrayal and murder of the emperor by his jealous son and the killing of Maximus' family that set the events of the rest of the film in motion. The new emperor orders that Maximus should be killed but he escapes his death sentence only to be captured by a slave trader who takes him to North Africa and forces him to fight as a gladiator. The viewer watches Maximus fight his way to fame and to the Coliseum in Rome where he becomes loved by the crowd. Here is where the hero encounters the evil emperor once again. ...read more.

The armour is dented and bashed and swords have imperfections which adds furthermore to the films attention to detail. The costumes for the Emperor and the royal family are also very realistic with lots of jewellery and crowns. Many filming techniques are used in the film to create different moods and atmospheres. In the opening scene a yellow/gold filter is used to add warmth to the image of the cornfields while close-up shots make the viewer pay particular attention to certain details for instance the close up shot of Maximus' hand showing a wedding ring. In the forest a blue filter is added to the battle scene to create a feeling of cold while panoramic and panning pictures show both the advancing, chaotic Germanic army and the very organised Roman army. In the same scene close up shots are used at the same time as a pause in the music to add dimension and drama to the point where the leaders of the two armies meet in battle. Empire of the sun tells the story of how a young English boy's sheltered and privileged life in Shanghai comes abruptly to an end when the Japanese invade the city during the war between the two countries in the mid 20th century. ...read more.

There are similarities in the films plots such as the uniforms of the Roman and Japanese army and the clear illustration of order and chaos, with the very organised Roman army and the advancing chaotic barbarian army in gladiator and the order of the Japanese army and the fleeing crowd in Empire of the Sun. Although the main characters of the two films could not be more different in appearance and background their situations are very similar, both have been separated from their families and both have been imprisoned through no fault of their own. The filming techniques used in gladiator are effective as are the techniques used in Empire of the Sun but they make the films appeal to different audiences. In Empire of the Sun the film is seen through the eyes of Jim which brings his thoughts and feelings to the viewer in very direct way. In Gladiator there is a lot of sudden contrast, from the warmth of the cornfields to the starkness of the forest in the battle scene. In the film the battle scenes are in much more depth and more dramatised bringing more action to the film and making it more fast paced and more appealing to a younger audience. ...read more.