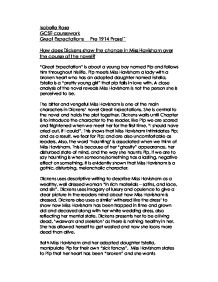 Isabelle Rose GCSE coursework Great Expectations Pre 1914 Prose`` How does Dickens show the change in Miss Havisham over the course of the novel? "Great Expectation" is about a young boy named Pip and follows him throughout his life. Pip meets Miss Havisham a lady with a broken heart who has an adopted daughter named Estella, Estella is a "pretty young girl" that pip falls in love with. A close analysis of the novel reveals Miss Havisham is not the person she is perceived to be. The bitter and vengeful Miss Havisham is one of the main characters in Dickens' novel Great Expectations. She is central to the novel and holds the plot together. Dickens waits until Chapter 8 to introduce the character to the reader, like Pip we are scared and frightened when we meet her for the first time. "I should have cried out, if I could". This shows that Miss Havisham intimidates Pip; and as a result, we fear for Pip; and are also uncomfortable as readers. Also, the word 'haunting' is associated when we think of Miss Havisham. This is because of her "ghostly" appearance, her disturbed state of mind, and the way she haunts Pip. ...read more.

He is powerfully attractive to the mysterious ways of Satis House and Estella. He accepts her cruelty as he truly loves her, he follows her taunting and harshness and wishes to become a rich gentlemen; to please Estella and to stop her name calling and for her not see him as "coarse", "rough" boy. This is when Pip wants to higher his social class, starting the course of "Great Expectations". Miss Havisham is the feeder to the way Pip thinks and manipulates him into thinking that she is the benefactor for him becoming a gentleman living in London. She leads him to believe this by slyly hinting that she knows more. "Mr Jaggers is your guardian I understand?" This makes pip believe that it is her that is helping him to becoming a gentleman. Although in the end we find out it is a convicted he helped when he was younger. Satis House, the reflection of Miss Havisham's state of mind "in every crevice"; decaying. She has enclosed herself within the walls of Satis House letting no outside world in. The only way you can get in is through the front gate which is guarded at all times. ...read more.

Towards the end of the novel in chapter 49 Dickens use of ominous language prepares the reader the Miss Havisham's death. "Funeral music", "the cathedral chimes" All these quotes prepare the reader for something to go wrong, like a death is going to occur. Dickens also explains when he walks pasted the "priory garden, seemed to call to me that the place was changed" this shows the future will change by a death. Miss Havisham's death made a big difference to the novel. In chapter 49 Miss Havisham dies after server burns from an accidental fire. Her death is very painful. "She was shrieking, with a whirl of fire blazing all about her", this death in some ways seems to release her from all her hurt and pain. The fire is symbolic; pip "dragged the heap of rottenness in the midst, and all the ugly things that sheltered there". This shows it dragged all the decay and the living death away. The fire ended it all. In conclusion to this Miss Havisham has changed from an evil witch who only thinks about herself to a woman who feels guilty for all the things she has done. ...read more.