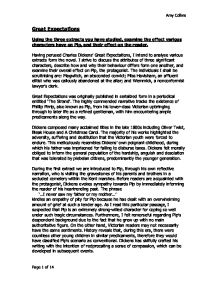 Great Expectations Using the three extracts you have studied, examine the effect various characters have on Pip, and their effect on the reader. Having perused Charles Dickens' Great Expectations, I intend to analyse various extracts form the novel. I strive to discuss the attributes of three significant characters, describe how and why their behaviour differs form one another, and examine their overall effect on Pip, the protagonist. The individuals I shall be scrutinising are: Magwitch, an absconded convict; Miss Havisham, an affluent elitist who was callously abandoned at the altar; and Wemmick, a nonconformist lawyer's clerk. Great Expectations was originally published in serialized form in a periodical entitled 'The Strand'. The highly commended narrative tracks the existence of Phillip Pirrip, also known as Pip, from his lower-class Victorian upbringing through to later life as a refined gentleman, with him encountering ample predicaments along the way. Dickens composed many acclaimed titles in the late 1800s including Oliver Twist, Bleak House and A Christmas Carol. The majority of his works highlighted the adversity, suffering and destitution that the Victorian youth were forced to endure. This meticulously resembles Dickens' own poignant childhood, during which his father was imprisoned for failing to disburse taxes. Dickens felt morally obliged to inform the general population of the hardship, anguish and desolation that was tolerated by plebeian citizens, predominantly the younger generation. During the first extract we are introduced to Pip, through his own reflective narration, who is visiting the gravestones of his parents and brothers in a secluded cemetery within the Kent marshes. Before readers are acquainted with the protagonist, Dickens evokes sympathy towards Pip by immediately informing the reader of his heartrending past. The phrase '...I never saw my father or my mother...' kindles an empathy of pity for Pip because he has dealt with an overwhelming amount of grief at such a tender age. As I read this particular passage, I suspected that Pip is an extremely strong-willed character for coping so well under such tragic circumstances. ...read more.

Throughout the extended metaphor, numerous macabre allusions to death conjure an image of fragility and impassivity for the reader. References including 'grave clothes', 'shroud' and 'corpse-like'. succeed in evoking empathy towards Miss Havisham. Additionally, the death citations strengthen the depressing tone of the extract. I think that Dickens has made ample references to death in order to give readers the impression that Pip's future is cataclysmic. Subsequently, Pip eventually receives an opportunity to reveal his true opinion of Estella. Miss Havisham interrogates Pip with the intention of determining whether or not her malevolent plan is succeeding. She is ecstatic when Pip replies 'I think she is very pretty'. She has prevailed in her aim to secure Pip's infatuation with her adoptive daughter. When Havisham recurrently demands 'Anything else?' she has identified that Pip feels distressed and awkward, yet she forces him to expand on his thoughts. However, Miss Havisham is unnerved when Pip unexpectedly reciprocates with 'I think I should like to go home'. Havisham takes umbrage at the fact that Pip is refusing to comply with her debauchery. This is apparent when she indignantly stipulates 'You shall go soon, play the game out'. Dickens has exerted this distinctive phrase to illustrate Havisham's perpetual domination. Readers' sympathy for Pip is strengthened because it is apparent that he remains inferior to Havisham. Dickens implies that Estella has triumphed both in their game of cards and in compelling Pip to feel deficient by considering him to be of equal significance to a beggar through employment of the ambiguous phrase 'she beggared me'. As I read this particular pronouncement, I envisaged Estella to have an aloof expression towards Pip and be treating him with utter disregard. From this conceptualization, I deduced that Estella is a heartless, self-centred girl who holds no consideration for anybody else's feelings. My personal enmity towards Estella resulted in my sympathy towards Pip rising. ...read more.

In general, Wemmick is benign and urbane; his optimistic qualities are contagious. As a result of this, Pip begins to be more appreciative and sanguine. In conclusion, Dickens has achieved his intention of depicting an intriguing amalgamation of characters and a riveting coalition or situations. These enthralling predicaments maintain the audience's fascination with the novel and sustain readers' infinite captivation. 'Great Expectations' is a reflection of Pip's capricious journey through life; Dickens has proficiently evinced how fundamental eventualities in the past can determine an individual's future. Dickens' novel appeals to a wide audience because the principles of the occurrences can be effortlessly linked to contemporary society. This enhances the aspect of reality in 'Great Expectations', ensuring that the narrative remains perpetually popular. During the Victorian era, when the novel was primarily published, Dickens was classed as controversial due to his pioneering opinions and innovative outlook. Victorian readers would have been astounded at his audacity to bring to light the horrific plight of working-class children; this developed a contentious dissent and a furore surrounding Dickens. The pandemonium that encompassed the author was furthered by his portrayal of a convict as a virtuous individual. Largely, Victorian readers were bigoted and prejudiced and had not heretofore comprehended that a criminal can reform. I think that Dickens' polemic argument transformed the views of the populace, henceforth revolutionizing civilization. I believe that Dickens was so successful because his works of fiction were written from an impartial perspective and he represented both underprivileged and affluent characters, meaning that indigent and wealthy citizens alike could relate to the individuals. Personally, I delighted in reading the novel since it gave me an insight into life in the Victorian epoch whilst also highlighting significant social issues such as the Victorian class structure. Although I may not favour all the characters, I appreciate that an antagonist can add to the readers' enthrallment. I predominantly enjoyed perusing the graveyard scene as it is exceedingly tense and exhilarating. Overall, I think that 'Great Expectations' is an outstanding novel and that Charles Dickens is a tremendously copasetic author. Amy Collins Page 1 of 14 ...read more.