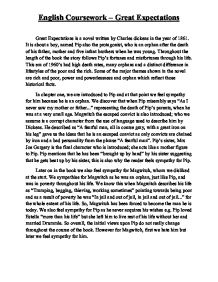 Great Expectations is a novel written by Charles dickens in the year of 1861. It is about a boy, named Pip also the protagonist, who is an orphan after the death of his father, mother and five infant brothers when he was young. Throughout the length of the book the story follows Pip's fortunes and misfortunes through his life. This era of 1960's had high death rates, many orphans and a distinct difference in lifestyles of the poor and the rich. Some of the major themes shown in the novel are rich and poor, power and powerlessness and orphan which reflect those historical facts. In chapter one, we are introduced to Pip and at that point we feel sympathy for him because he is an orphan. We discover that when Pip miserably says "As I never saw my mother or father..." representing the death of Pip's parents, when he was at a very small age. ...read more.

for the whole extent of his life. So, Magwitch has been forced to become the man he is today. We also feel sympathy for Pip as he never acquires his wishes e.g. Pip loved Estella "more than his life" but she left him to live rest of his life without her and married Drummle. So overall, the initial views upon Pip do not really change throughout the course of the book. However for Magwitch, first we hate him but later we feel sympathy for him. Chapter one is set in a grave yard where Pip's mother, father and five infant little brothers are buried. The fact that it is set in a grave yard, it suggests a sad and dark mood. This type of setting also helps Magwitch to frighten Pip and bring to live an imaginary character named the "young man" when pip is at the peak most venerable point in the grave yard. ...read more.

First chapter contains only few of the wide range of themes seen in the novel, here are some of the major themes: crime and punishment are portrayed by Magwitch's criminal life and the "cat and mice game" that he has to play with the police and also orphan is a regular theme, Pip is raised "by hand" with very little love and care by his sister. Nevertheless, the remainder of the novel contains many other themes rich and poor e.g. Miss Havisham is wealthy while Pip is poor. So, overall the first chapter raises some very interesting questions for the reader such as: who is the escaped convict? Will Pip follow his orders? These tempting questions which the reader wants answers to and in search of these answers the reader reads further. Dickens also uses some techniques that lure the reader to read for example careful characterisation, use of humour, suspense and themes which drive the plot forward. Finally, Dickens has used various methods to ensure a very appealing first chapter and a tempting novel. ?? ?? ?? ?? English Coursework - Great Expectations ...read more.