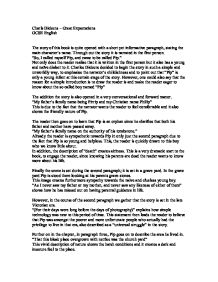 Great Expectations -how Dickens uses language in the opening chapter and in chapter 8.

Charls Dickens - Great Expectations GCSE English The story of this book is quite opened with a short yet informative paragraph, stating the main character's name. Through out the story it is narrated in the first person. "So, I called myself Pip, and came to be called Pip." Not only does the reader realise that it is written in the first person but it also has a young and na�ve dialect to it. Charles Dickens decided to begin the story in such a simple and unworldly way, to emphasise the narrator's childishness and to point out that "Pip" is only a young infant at this certain stage of the story. However, one could also say that the reason for a simple introduction is to draw the reader is and make the reader eager to know about the so called boy named "Pip" The addition the story is also opened in a very conversational and forward manor. "My father's family name being Pirrip and my Christian name Philip" This is due to the fact that the narrator wants the reader to feel comfortable and it also shows the friendly nature of Pip. ...read more.

As the man carries on talking to Pip, he speaks in a very imperative manor. "Tell us you name!" Although the man seems to be poorer than Pip, he tires to gain control and superiority. Whilst Pip replies in a very polite tone, showing the reader how scared he is of this randomer. Moreover, as the man speaks, it is obvious that he has not been educated very well. "Pint out the place!" The word "pint" instead of "point" shows the lack of knowledge the man has. This shows that not everybody had the chance to be educated, also emphasising the man's poorness. Later on in the chapter, in paragraph five, the man's, whose name is Magwitch, fatherly attitude towards the infant, Pip, starts to appear. "The man, after looking at me for a moment, turned me upside down" explains how desperate he is; since Magwitch was looking for food to eat, because he was extremely hungry. Finally when he found a piece of bread, that fell out of Pips pocket, he ate the bread "ravenously" - almost like an animal. However, looking at the first quotation, Magwitch appears to have turned Pip upside down in a surprising manor. ...read more.

It also emphasise how important class was in that period of time. In addition the use of "boy" instead of Pip's actually name shows how Estella refuses to call him by his name, almost taking his identity away from him, also taking any power he has away from him. Estella has a very demanding attitude towards Pip, while Pip remains calm and act very polite to Estella. "After you miss" shows Pip's politeness and his shier kindness. However the two contrasting behaviours of Estella and Pip, reflects Pip's vulnerability and weakness while it brings out Estella's passion for power and her eagerness to outstand other people; thus causing the read to despise Estella, yet grow even more to love Pip. As Pip walks into the room, the vision of death dawns upon him once again. He walks into the room to find Mrs Havishem sat in her chair in a very depressing stance. To describe the place he uses words such as: "withered", "skin", "bone", "skeleton", and "ashes" which all relate to death. However, Pip finds this imagery of death in the room disturbing, even though he has seen death lurking round the grave yard, since it is not natural or outside - this death was inside a persons home. ...read more.