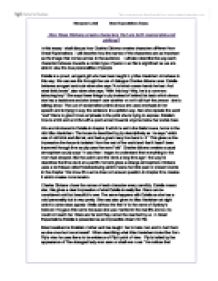 Great Expectations. How does Dickens create characters that are both memorable and striking?

How Does Dickens create characters that are both memorable and striking? In this essay I shall discuss how Charles Dickens creates characters different from Great Expectations. I will describe how the names of the characters are as important as the image that comes across to the audience. I will also describe the way each character behaves towards a certain type of person as this is significant as we are able to view the true personalities of people. Estella is a proud, arrogant girl who has been taught by Miss Havisham to behave in this way. We can see this through the use of dialogue Charles dickens uses. Estella behaves arrogant and rude when she says "And what coarse hands he has! And what thick boots", also when she says, "With this boy! Why, he is a common labouring boy!" She says these things to pip instead of behind his back which shows she has a backbone and she doesn't care whether or not it will hurt the person she is talking about. The use of exclamation points shows she uses emphasis in her speech and is trying to say the sentence in a spiteful way. ...read more.

He sees Miss Havisham as she sits "corpse-like" and like "earthy paper", this gives us the impression that Satis house and Miss Havisham gives the setting a melancholy setting. We also can tell that Miss Havisham has stopped time at the point at which her heart has been broken, the point at which she stopped living as a passionate, alive young woman. When using speech Charles Dickens uses lot of imperatives for Miss Havisham as she says "come nearer; let me look at you, come close." As she is a higher class than most people she relates with, she uses imperatives to make them do what she wants them to do for her. Miss Havisham talks polite but with a posh accent we can view this when she says "so new to him" she muttered "so old to me, so strange to him, so familiar to me; so melancholy to both of us! Call Estella!" Charles dickens repeated the word "so" to create more emphasis to the words following the "so". Dickens conveys the way Miss Havisham talks by using posh language and by having a backbone to tell the truth. ...read more.

Although Magwitch is a convict and a fearful man, he is decent enough to take the blame for Pip's theft which in those days was a hanging offence. This reflects the novel's theme that a real gentleman is not someone who has money and manners, but someone who does good deeds. In the churchyard where Pip begins his memories, Magwitch is first made aware of himself when stealing food. It is suggested to us that his poor start in life has made him to have a life as a criminal. Charles Dickens might have chosen Magwitch's name because 'Mag' is a slang name for magpie which is a bird associated with theft. Also the idea of 'Magic' in both 'Mag' and 'witch' perhaps hints at amazing powers to escape out of prison to make money, however the idea of a 'witch' suggest a person unfairly condemned by society and the laws. Also Magwitch's first name is Abel. In the Holy Bible, Able is a sheep breeder. Magwitch makes all his money in Australia as a sheep-breeder. Overall I think that Dickens created characters by choosing the name carefully. Also to keep them memorable he showed how they act towards different people and how social class can be seen by the way people act, dress or by the way they speak. ?? ?? ?? ?? Kiranpreet Johal Great Expectations Essay ...read more.