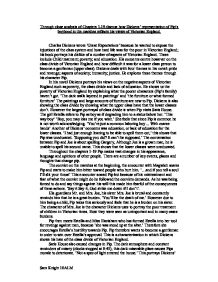 Great Expectations, How does dickens view of victorian england show through pip

The realization that he is uneducated and common inspires Pip's desire to become gentry in order to gain the love of Estella. Often Pip is treated badly by Estella because he is so common. This is shown when Estella hands him some bread, meat and a mug of beer after his meeting with Miss Havisham. '.....and a small mug of beer, she handed them to me and walked away' Estella's total disdain of Pip shows that she feels he isn't worth acknowledging, this degrades Pip. This want of acknowledgement and desire to show Estella he is a good man makes Pip's desire to become gentry. This side of the novel is where Dickens shows that it was very hard for lower classes to become upper class (gentry.) He shows this in the mocking and sighing of people as Pip tells them of his great expectations. In the book Pip is narrating the story, although there are two narrators in the story. Pip as an older gentleman looking back on what his life was like and the Pip as the story is happening. These effects would normally confuse a reader, but Dickens uses the duel narration technique to show the reader what was happening and what Pip was thinking and feeling. ...read more.

Dickens also portrays his dislikes of the large class divide. He shows the class-divide by Estella not wanting to have contact with Pip as he was of lower class. He uses a key emotional method to make us see his points that the class-divide and treatment of children was bad. He uses our emotions in particular our sympathy for Pip as a young boy being beaten. He also uses our sympathy for Joe to make a point of poor education. Overall Dickens shows that in Victorian England life for the upper class was easy but they were very bad people but in contrast life for the lower class was hard work and painful but they are the good people. He uses his novel to show his dislike and anger that this is the case and wants to do something about it. He makes points that the upper class treats the lower class badly and also shows that this is because the lower class works hard and toil whereas the upper class lie back and relax. He makes numerous points about the lack of good educations amongst the lower class. He shows this by Pips treatment by Estella. His novel shows the aspects of society that Dickens feels are negative. With his novel Dickens provided the ammunition for the growing movement for social reform to fire and begin an attempt to change Victorian England's society for the better. Sam Knight 10ALM ...read more.