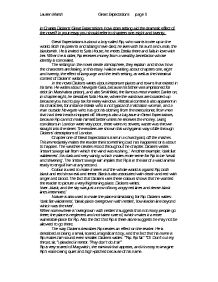 In Charles Dickens' Great Expectations how does setting aid the dramatic effect of the novel? In your essay you should refer to chapters one, eight and twenty. Great Expectations is about a boy called Pip, who wants to rise up in the world. Both his parents and siblings have died; he lives with his aunt and uncle, the blacksmith. He is invited to Satis House; he meets Estella there and falls in love with her. When he is older, Pip receives money from a wealthy benefactor whose identity is concealed. The settings in the novel create atmosphere, they explain and show how the characters are feeling. In this essay I will be writing about chapters one, eight and twenty, the effect of language and the text's setting, as well as the historical context of Dickens' writing. In the novel Dickens writes about important places and towns that existed in his time. He writes about Newgate Gaol, because his father was imprisoned for debt (in Marshalsea prison), and also Smithfield, the famous meat market. Earlier on, in chapter eight, he describes Satis House, where the windows are boarded up because you had to pay tax for every window. ...read more.

The way Miss Havisham is described shows she is very old, and doesn't care about her appearance. Dickens writes: 'bride within the dress had withered like the dress...shrunk to skin and bone... now waxwork and skeleton'. Pip is wary of Miss Havisham because of her appearance. She wants Estella, her adopted daughter to make Pip fall in love with her, so that she can 'break his heart'; that is what happened to Miss Havisham (she was abandoned on her wedding day at twenty minutes to nine). When Estella and Pip play cards Miss Havisham tells Estella to 'beggar him'. The card game is called Beggar my Neighbour, Miss Havisham wants Estella to not only win the game but for her to make Pip fall in love with her as well as make him ready to beg for Estella's attention. Another example of how Dickens creates drama and suspense is the way he describes Estella. She is very disdainful and looks down on Pip. Dickens writes: 'but he is a common labouring boy'. This is unusual because in the Victorian era women were seen as below men; rich women were expected to look pretty and not express opinions on important matters. ...read more.

This proves that Mr Jaggers is not very pleasant to clients or other people he has dealings with. In conclusion, Dickens' use of setting makes the reader more able to imagine what life was like in the Victorian times, he describes everything, down to the way windows were boarded up and the time Miss Havisham's watch had stopped. All throughout the novel; especially in chapters one, eight and twenty the setting adds drama and effect, it changes the mood of the characters and in particular the way the story unfolds into a happy ending. Dickens has portrayed London, and what it was like in that time, very accurately and showed the horrors of Newgate Gaol without being too gruesome. I think that Dickens' use of setting changes the whole story and makes it easier to read( with some of the language) for instance the first scene depicts a scene that is extremely frightening with black and anger, whereas in chapter twenty, Pip is grown up and excited to be in London.(even though he isn't impressed with it). The story has a good moral, because it shows that things do not always end up like you expect, like Miss Havisham and Pip's wealthy benefactor. In Dickens' use of setting he adds mystery and suspense which keeps the reader engaged throughout all the chapters I have looked at and the whole book. Lauren Marsh Great Expectations page 1 ...read more.