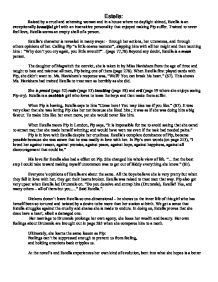 Great Expectations - The character of Estella

Estella: Raised by a cruel and scheming woman and in a house where no daylight shined, Estella is an exceptionally beautiful girl with an insensitive personality that enjoyed making Pip suffer. Trained to never feel love, Estella seems an empty shell of a person. Estella's character is revealed in many ways: - through her actions, her utterances, and through others opinions of her. Calling Pip "a little coarse monster", slapping him with all her might and then taunting him : "Why don't you cry again, you little wretch?" . (page 77,78) Beyond any doubt, Estella is a mean person. The daughter of Magwitch the convict, she is taken in by Miss Havisham from the age of three and taught to hate and mistreat all men, Pip being one of them (page 278). When Estella first played cards with Pip, she didn't want to. Ms. Havisham's response was, "Well? You can break his heart." ...read more.

In Pip's own words (on page 213), "I loved her against reason, against promise, against peace, against hope, against happiness, against all discouragement that could be." His love for Estella also had a effect on Pip. She changed his whole view of life. "...that the best step I could take toward making myself uncommon was to get out of Biddy everything she knew." (81). Everyone's opinions of Estella are about the same. All the boys believe she is very pretty but when they fall in love with her, they get their hearts broken. Estella was raised to treat men that way. Pip also got very upset when Estella led Drummle on. "Do you deceive and entrap him (Drummle), Estella? Yes, and many others - all of them but you...." Said Estella.". Dickens doesn't leave Estella so one-dimensional - he shows us the inner life of this girl who has herself been so tortured and twisted by a desire to be more than her station at birth. ...read more.

Raised by the old woman to be cruel and hard to men, Estella, a great beauty, entrances Pip. She is mean to Pip for most of his life, although at the novel's end they meet again, and she seems to be a softened, changed woman. Estella is another child of mysterious parentage, and Pip eventually learns that she's Magwitch's daughter. Estella is as beautiful and cultured as she is cold and brutal, and Pip immediately falls in love with her at a tender age. The daughter of Magwitch the convict, she is taken in by Miss Havisham from the age of three and taught to hate and mistreat men of all kinds, Pip among them. The more Pip loves her, the more Estella seems to enjoy torturing and manipulating him. She is from even lower stock in the class system than he is, and one might think she resents his intrusion into the life she has found among the wealthy. . As they get older, the only feeling that she shows is in her concern for Pip by telling him that he is warned. ...read more.