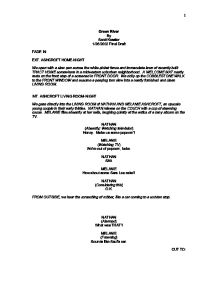 Green River By Scott Kessler 1/26/2002 Final Draft FADE IN: EXT. ASHCROFT HOME-NIGHT We open with a slow pan across the white-picket fence and immaculate lawn of recently built TRACT HOME somewhere in a midwestern suburban neighborhood. A WELCOME MAT neatly rests on the front step of a screened-in FRONT DOOR. We dolly up the COBBLESTONE WALK to the FRONT WINDOW and assume a peeping tom view into a neatly furnished and clean LIVING ROOM. INT. ASHCROFT LIVING ROOM-NIGHT We gaze directly into the LIVING ROOM of NATHAN AND MELANIE ASHCROFT, an upscale young couple in their early thirties. NATHAN relaxes on the COUCH with a cup of steaming cocoa. MELANIE files absently at her nails, laughing quietly at the antics of a zany sitcom on the TV. NATHAN (Absently; Watching television) Honey. Make us some popcorn? MELANIE (Watching TV) We're out of popcorn, babe. NATHAN s**t. MELANIE How about some Sara Lee cake? NATHAN (Considering this) O.K. FROM OUTSIDE, we hear the screeching of rubber, like a car coming to a sudden stop. NATHAN (Alarmed) What was THAT? MELANIE (Frowning) Sounds like Saul's car. CUT TO: EXT. ASHCROFT HOME, CURB-NIGHT A HOT ROD MUSCLE CAR with the rear end jacked up comes to a screeching stop, leaving rubber on the tarmac. FOUR YOUNG PUNKS pile out of the interior and onto the sidewalk. The obvious leader is SAUL, a tough-looking youth with short-cropped hair and black eyes. The OTHER THREE are EFRAM ZAMORA, a short, intense Hispanic kid with a frightening twinkle in his eyes, ZACK HARLOW, tall, geeky and blond, and CLOVIS COLE, whose lack of intelligence is obvious from his dull expression and vacant grin. CLOVIS is clutching a bundle gently under one arm. All are dressed in the STREET PUNK uniform of LEATHER JACKET and JEANS. SAUL Listen, I'm gonna handle all the talking on this gig, capice? SAUL'S GANG nod in unison. ...read more.

BOB I'm not a speed freak. I only use it to help me study. EFRAM (Smirking) Whaaat? Ya get that Sally Struthers home correspondence course? Lemme guess...TV repairman? BOB looks at EFRAM as if he was a lower form of life. BOB No. If you must know, I'm studying to be a minister. There is a moment of silence, and then SAUL and EFRAM explode with LAUGHTER. BOB DICKS! Nothing ever changes! You can leave anytime! But if you stay here, you will respect me and my new life! SAUL and EFRAM compose themselves, choking back more laughs. SAUL snaps a mock SALUTE. SAUL Anything you say, Bob-O. BOB (Relenting) And don't call me Bob-O. FADE TO BLACK FADE IN ON: EXT. ROADSIDE DINER - DAY A lonely old DINER hunkers in center frame, its awning a faded eyesore. Only two CARS are parked in the gravel PARKING LOT, an old FORD PINTO and FREDDIE'S 1989 CADDY. CUT TO: INT. ROADSIDE DINER-DAY We push through the greasy DOOR of the DINER and into its tired interior. The counter is faded and stained, the BOOTHS empty. Behind the COUNTER is a BORED LOOKING WAITRESS. Twangy Country music wafts through the air along with cigarette smoke and grease. Dolly along the COUNTER to FREDDIE, munching eggs. A CIGARETTE smolders in the ashtray beside a cup of coffee. No other CUSTOMERS are in the place. CLOSE UP on FREDDIE, slurping his coffee and rubbing out his smoke. Only then does he take notice of the WAITRESS, staring at him. FREDDIE Hey sis. WAITRESS Hey yourself. FREDDIE You seen these boys the last couple of days? He tosses a PHOTO down on the COUNTER. She eyes it, but doesn't pick it up. WAITRESS (Bored) Nah. FREDDIE Take a good look. He pushes a TWENTY DOLLAR BILL across the COUNTER with the PHOTO. The WAITRESS gives him the evil eye. WAITRESS You a cop? FREDDIE (Chuckle) No. WAITRESS Private d**k? FREDDIE (Irritated) No. WAITRESS An agent of some kind? ...read more.

You can never tell. SALLY Edgar, that's an awful thing to say! EDGAR Prolly had gambling debts or something. SALLY Did that Clovis guy ever come back in? He was sweet in a weird way, lying about kidnapping that kid and all to impress me. EDGAR smirks. EDGAR Yeah, 'Ol Clovis is a sweetie. Haven't seen him since that night he was gabbin' your ear off. He had no idea you sell it, ya know? EDGAR busts up laughing. SALLY You're such a pig Edgar. Sometimes it's nice to think a guy hits on me for more than a quick f**k. EDGAR What makes you think you're good for anything else? SALLY You p***k! She throws ice at him. After a moment, they both laugh. EDGAR Need a ride home? SALLY Nah. I'm gonna walk. EDGAR Ok. I gotta lock up, so scoot on out of here. SALLY picks up her bag and sashays out the door. EXT. SLUMMY NEIGHBORHOOD-NIGHT-CONTINUOUS SALLY strolls out, down the dark, slummy streets of a bad neighborhood. Villains loiter in doorways, thugs smoke Crack on the hoods of their cars and johns couple in the darkness of alleys with used up tricks. SALLY strides past all of it, unafraid and jaded, ignoring the footfalls behind her. After a few moments, she turns to see who is following her. BOB is standing there, his head SHAVED, wearing a CHICAGO BEARS sweatshirt. SALLY Do something for ya, sweetie? BOB (Nervous) I was wondering if you were still on duty, or whatever. SALLY laughs. SALLY Honey, I'm always "on duty." BOB Can I maybe purchase an hour of your time? SALLY A whole hour huh? She smiles flirtatiously, unaware of the disaster she invites. BOB (Fidgeting) I mostly wanna talk. SALLY If you got a hundred bucks, we can do anything you want. BOB shows her a wad of cash. SALLY (Cont.) Come on up then, honey. BOB and SALLY vanish into her rundown apartment building. Seconds later, we hear an ear splitting SHRIEK. FADE TO BLACK CREDITS ROLL OVER JAWBREAKER'S EYE-5. Completed 2/4/2002 Original Draft 11/1996 1 ...read more.