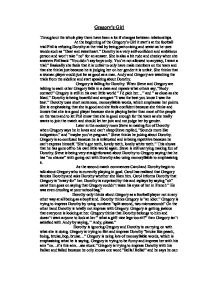 Gregory's Girl -plot and how gender stereotypes are reversed.

Gregory's Girl Throughout the whole play there have been a lot if changes between relationships. At the beginning of the Gregory's Girl it start's at the football trial Phil is refusing Dorothy at the trial by being patronising and sexist as he uses words such as "Dear and sweetheart." Dorothy is a very self-confident and ambitious person and won't take "no" for an answer. She is also a bit rude and cheeky when she answers Phil back "You didn't say boys only. You're not allowed to anyway, I want a trial." Basically she feels that it is unfair to only have male members on the team and that she thinks just because he is judging her on her gender it is unfair. She thinks that a woman player could just be as good as a man. Andy and Gregory are watching the trials from the sideline and start speaking about Dorothy. Gregory is falling for Dorothy. When Steve and Gregory are talking to each other Gregory falls in a daze and repeats what others say, "Body contact!" Gregory is still in his own little world " I'd pick her..." ...read more.

He gets pass on from one girl to another and he doesn't know what happening until he gets with the girl who fancies him. He though he has his the jackpot by going out with three girls in one day. Dorothy friends have set him up because they were trying to get Susan and Gregory together instead Gregory being with Dorothy, which has works but has been worthwhile. Gregory's Girl is a play, which is a reverse sex stereotyping because usually it the boy who asks a girl out but in Gregory's girl it is the girl who asks a boy out. Also it is girls who are normally better at cooking but in this case it is a boy who is better at cooking than a girl. Most things that happen in Gregory girl are mostly reverse sex stereotyping for example when Gregory is absolutely useless at playing football and he is trying to be the goalie. On the other hand Dorothy is a very good football player. Also the younger people in Gregory girl are more mature this is shown when Gregory little sister Madeline knows what is going on with Gregory because he is acting in a very immature way. By Jessica Wong ...read more.