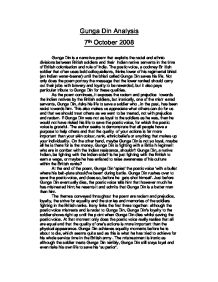 Gunga Din Analysis 7th October 2008 Gunga Din is a narrative poem that exploits the racial and ethnic divisions between British soldiers and their Indian native servants in the time of British colonisation and rule of India. The poetic voice, a cockney British soldier that often uses bold colloquialisms, thinks lower of his regimental bhisti (an Indian water-bearer) until the bhisti called Gunga Din saves his life. Not only does the poem portray the message that the lower ranked should carry out their jobs with bravery and loyalty to be rewarded, but it also pays particular tribute to Gunga Din for these qualities. As the poem continues, it exposes the r****m and prejudice towards the Indian natives by the British soldiers, but ironically, one of the mistreated servants, Gunga Din, risks his life to save a soldier who, in the past, has been r****t towards him. This also makes us appreciate what others can do for us and that we should treat others as we want to be treated, not with prejudice and r****m. ...read more.

At that moment only does the poetic voice really realise that all are equal and that the quality of one's actions is more important than the physical appearance. Gunga Din achieves equality moments before he is about to die, which seems quite sad as this is what he has tried to achieve for his whole service time in the British army. The mistreatment is ironic as although the soldier treats Gunga Din terribly, Gunga Din still stays loyal and even risks his own life to save his 'superior'. The poem compares different cultures and classes negatively. In doing so, the poet creates a division that runs parallel to the comparison of the ethnic beliefs and hostility between the two cultures looked at in this poem. The only time we see this division disappear is when the author compares the two cultures in a positive light, when a person from one culture saves someone from the other's life. These parallel themes and imagery can cause for varied interpretations of the poem. ...read more.

The main message is that these things do not count towards how good a person you are and that r****m and prejudice go against this message. Ultimately the message is do not be r****t towards others. This message is conveyed very well because the whole poem is not about not being r****t, it is about the journey a r****t person went down to realise it is wrong. This is a more effective way of getting a point across because it makes us think that if this person can achieve equal treatment through perseverance then why can't we? In light of the authorial intention, the poem is good. It conveys a message in a different way whilst proving to be an interesting read that includes a fitting metre, personification, consonance and a good structure. I would have preferred it if the poetic voice would have mistreated Gunga Din even more so in the beginning to make his journey to equality more dramatic. It is good to have a character that you do not like become a hero over time and it definitely would have helped deliver the message. By Max Winston 9WZ/En1a ...read more.

This is a strong essay showing a good understanding of the themes introduced and explored in the poem. There still needs to be more evidence from the poem used to support the interpretations discussed and when analysing a poem always consider the beginning and ending of the poem and how they may be linked.