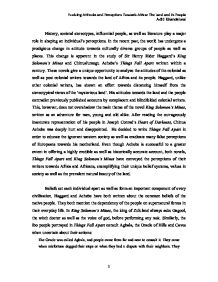 Haggard's King Solomon's Mines and Chinualumogu Achebe's Things Fall Apart written within a century. These novels give a unique opportunity to analyze the attitudes of the colonial as well as post colonial writers towards the land of Africa and its people

History, societal stereotypes, influential people, as well as literature play a major role in shaping an individual's perceptions. In the recent past, the world has undergone a prodigious change in attitude towards culturally diverse groups of people as well as places. This change is apparent in the study of Sir Henry Rider Haggard's King Solomon's Mines and Chinualumogu Achebe's Things Fall Apart written within a century. These novels give a unique opportunity to analyze the attitudes of the colonial as well as post colonial writers towards the land of Africa and its people. Haggard, unlike other colonial writers, has shown an effort towards distancing himself from the stereotypical views of the 'mysterious land'. His attitudes towards the land and the people contradict previously published accounts by complacent and blindfolded colonial writers. This, however, does not overshadow the main theme of the novel King Solomon's Mines, written as an adventure for men, young and old alike. After reading the outrageously inaccurate representation of his people in Joseph Conrad's Heart of Darkness, Chinua Achebe was deeply hurt and disappointed. He decided to write Things Fall Apart in order to educate the ignorant western society as well as eradicate many false perceptions of Europeans towards his motherland. ...read more.

They are apt to make politeness for awe or servility" (Haggard, 125) Moreover, Umbopa, the native servant refers to the Europeans' lust for wealth and diamonds commenting "the diamonds are surely there, and you shall have them since you white men are so fond of toys and money" (Haggard, 122) This suggests that Africans lack a monetary system. Twala, the merciless king, is also shown to abuse his power and brutally murder innocent men. On the other hand, Things Fall Apart emphasizes that harmony was maintained by a group of men. Power comes from unity. Success was a direct product of hard work and dedication "Fortunately, among these people a man's worth was judged according to his worth and not according to the worth of his father." (Achebe, 5) and measured by possessions such as wives, children, barn etc... "There was a wealthy man ... had three huge barns, nine wives and thirty children."(Achebe, 15) These men held titles which gave them a higher status in society. It was the responsibility of the clansmen to watch out for other individuals in their society. We do not ask for wealth because he that has health and children will also have wealth. ...read more.

Sir Henry Rider Haggard's King Solomon's Mines and Chinua Achebe's Things Fall Apart are concise novels which offer insightful descriptions of Africa and Africans as discussed above. They elaborate upon the beliefs, values and harmony of the people with their native land. Haggard's description of Africa and Africans shows that his attitude is not completely detached from the stereotypical European beliefs. Achebe is successful in offering a credible and historically accurate description of the rich land, diverse culture and unique traditions. His attitude cannot be considered completely just nor unbiased as he is discussing the history of his own people. However, the analysis of the two novels brings out an interesting pattern. The perceptions presented in the novels preserve the thinking of the society when the two novels were each written. The post colonial society of today is much more accepting of the diversity present in indigenous cultures. This acceptance and appreciation was suppressed in the colonial era when strong nations such as Britain were colonizing other parts of the world. Overtime, our global society has prodigiously evolved and continues this progression implicating a growth of acceptance and appreciation of cultural diversity. ?? ?? ?? ?? Evolving Attitudes and Perceptions Towards Africa: The Land and its People Aditi Khandelwal 1 ...read more.