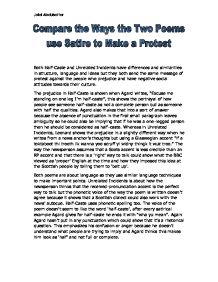 Both Half-Caste and Unrelated Incidents have differences and similarities in structure, language and ideas but they both send the same message of protest against the people who prejudice and have negative social attitudes towards their culture. The prejudice in Half-Caste is shown when Agard writes, "Excuse me standing on one leg I'm half-caste", this shows the portrayal of how people see someone half-caste as not a complete person but as someone with half the qualities. Agard also makes that into a sort of answer because the absence of punctuation in the first small paragraph leaves ambiguity so he could also be implying that if he was a one-legged person then he should be considered as half-caste. Whereas in Unrelated Incidents, Leonard shows the prejudice in a slightly different way when he writes from a news anchor's thoughts but using a Glaswegian accent "if a toktaboot thi trooth lik wanna yoo scruff yi widny thingk it wuz troo." ...read more.

Both poems are about language so they use similar language techniques to make important points. Unrelated Incidents is about how the newsperson thinks that the received-pronunciation accent is the perfect way to talk but the phonetic voice of the way the poem is written doesn't agree because it shows that a Scottish dialect could also work with the news' autocue. Half-Caste uses phonetic spelling too. The voice of the poem doesn't seem to like the word 'half-caste', after every satirical example Agard gives for half-caste he ends it with "wha yu mean". Again Agard hasn't put in any punctuation which could show that it's a rhetorical question. This emphasizes his confusion or anger because he doesn't understand what people are trying to imply and Agard thinks this makes him look as 'half' and not full or complete. ...read more.

In Half-Caste when Agard writes, "I half-caste human being cast half-a-shadow but yu must come back tomorrow wid whole of yu eye..." voices of what the poet thinks of people who say 'half-caste' are not very well taught because they're using only half of their brain which shows the irony of others being hypocritical. Half-Caste gets more and more aggressive and vicious as the poem goes on, "Explain yuself wha yu mean"; this builds a repeated pattern in the language, strengthening the impact the poem has on the reader and the poet's argument as well. Both poems have very little or no punctuation which makes the tone of the poems ambiguous and can be read in different manners. In this way you can interpret how strongly the poets feel about their argument. ?? ?? ?? ?? Jalal Abdulsattar ...read more.

This question asks readers to focus on how John Agard and Tom Leonard satirise prejudice against their cultural backgrounds, primarily in the way they speak. The candidate concentrates consistently on this topic and addresses how both poets use language to ...

This question asks readers to focus on how John Agard and Tom Leonard satirise prejudice against their cultural backgrounds, primarily in the way they speak. The candidate concentrates consistently on this topic and addresses how both poets use language to mock and satirise those that believe there is a 'right' way of speaking. There could be great depth given to their arguments, and the use of quoting needs to be more specific as candidates will lose easy marks for not quoting the bare minimum they need in order to convey the Evidence to their Point.

The Level of Analysis here is wholly representative of the average GCSE standard. The candidate comments on the poems effects on the readers ("it sounds more striking and sharp to the reader") and also how the poems are constructed in order to convey a satire of language. There is a great level of precise insight given to the structure of the poems, with the student recognising how the short, scripted staccato rhythm of 'from: Unrelated Incidents' gives the impression of formality and a newsreader's Autocue. They also talk about how Leonard writes phonetically, as how he is forcing the readers into speaking like he does, which mocks those that are not of Glaswegian descent as it satirises their inability to speak in a different accent. This kind of analysis is what should be expected from GCSE candidates, as it shows an understanding of the ways in which, through language, the poet successfully satirises people who believe their is a 'right' way to speak.

To gain further marks, the candidate should comment on the context of the poem. Tom Leonard is Glaswegian himself and for centuries the English ravaged the Scottish culture, tried to suppress them and make them submit themselves as a section of the British Empire. The Scottish, stereotypically, do not have the greatest view of the English and thus, this poem is mocking the ways in which the English are nigh-on religiously obsessed with what we deem 'proper' and 'correct'. He is taking our own language as twisting it to fit his own dialectal spelling as probably his most offensive satirical element of the poem.

With regard to 'Half-Caste', the candidate covers an equally successful spread of analysis, commenting on structure, spelling and language, but again misses the context marks. To achieve the highest band of marks at GCSE, some contextual awareness of the poets must be shown. Poets write with an intention, and this intention is influenced by context - the social and historical factors which themselves influence the writing of any piece of literature. Agard wrote his poems as a direct retort against the label of "half-caste". He believe that today's society (those who still use the phrase), are not aware of it's origin as the direct derivation from Latin meaning "half-pure". The candidate touches on this somewhat, but there is very little evidence shown to suggest they possess the knowledge to back up assumptions (Points) with actual fact.

The lack of cohesive conclusion suggest that maybe the candidate ran afoul of not finishing. The last paragraph makes an excellent Point, sticking to the PEE structure, but only the last two lines seem conclusive, but they do not at all address the question. To give a sense of closure, candidates should try to rephrase the question in their final sentence (e.g. - "In this way you can interpret how strongly the poets satirise to make a protest against prejudice"), to show they have consistently focused on it.

The Quality of Written Communication here is fair. The use of speech marks should be exclusively used on quotes from the poems though. As in all other types of writing, the standard procedure for speech marks is when directly quoting a source material - in this case, the poems. Otherwise, inverted commas should be used when writing the titles of the poems e.g. 'Unrelated Incidents' and 'Half-Caste', and all words in the poem titles should be capitalised.