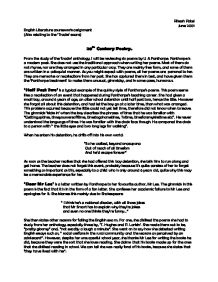 Half Past Two and Dear Mr.Lee

Rikesh Patel June 2001 English Literature coursework assignment (Also relating to the 'Tracks' exam) 20th Century Poetry. From the study of the 'tracks' anthology, I will be reviewing six poems by U A Fanthorpe. Fanthorpe is a modern poet. She does not use the traditional approach when writing her poems. Most of them do not rhyme, nor are they arranged in any particular way. They are mainly free form, and some of them are written in a colloquial manner. As you might expect with poems, all her poems are personal to her. They are memories or recollections from her past. She has captured them in text, and have given them the 'Fanthorpe treatment' to make them unusual, gimmicky, and in some cases, humorous. 'Half Past Two' is a typical example of the quirky style of Fanthorpe's poems. This poem seems like a recollection of an event that happened during Fanthorpe's teaching career. She had given a small boy, around 6 years of age, an after school detention until half past two, hence the title. However she forgot all about this detention, and had let the boy go at a later time, than what was arranged. This problem occurred because the little could not yet tell time, therefore did not know when to leave. The gimmick 'kicks in' when the boy describes the phrases of time that he was familiar with: "Gettinguptime, timeyouwereofftime, timetogohometime, Tvtime, timeforemykisstime etc". He never understood the language of time. He was familiar with the clock face though. He compared the clock to a person with " the little eyes and two long legs for walking". When he enters his detention, he drifts off into his own world: "So he waited, beyond onceupona Out of reach of all timefors And he'd escape forever" As soon as the teacher realises that she had offered this boy detention, she tells him to run along and get home. ...read more.

history, whereas with 'bad' children, whatever criticism or remark is given, there may be a genuine reason from the past, therefore to these children, "satisfactory" would be a suitable replacement. Basically, Fanthorpe is saying that a 'safe' way to describe a misbehaved child is by classing their achievement and behaviour as satisfactory. This is not arguable, as it is rather vague. The word does not mean much, yet, should satisfy the parents. "Fair" and "good" are the next lot of clich�s mentioned. Theses are 'multi-purpose' words that once again, do not mean much. It is a polite way of disguising a bad comment that would prevent any hassle. Parents would be satisfied with this comment, as it does not mean anything bad. "Feel free to deploy them", Fanthorpe is saying that these are the sorts of comments that should be used and it does not matter how many times you use them as they cannot come to harm. "Be on your guard", in other words, do not go saying anything controversial such as, "unmanageable oaf." This may upset parents to hear a teacher insulting their child like that. To prevent this, Fanthorpe advised using euphemism, which is when a mid-term is substituted for a strong one, such as, "finds the subject difficult." This diplomatic approach is not entirely honest, but is a subtle way of letting the parents down, thus "acquitting you". In other words, these sort of remarks would get you off the hook, i.e. converting "oaf into idiot, usher into master" - 'stroppy' kid into disabled. "Parent, child, head" she is comparing a school report to a piece of religious and biblical text. This metaphor is quite effective because, when reading this 'manual' there are many precautions and actions that the teachers take to ensure that they do not cause a 'negative vibe' between the them and the parents. As a result of this, it would make their jobs easier as they would not receive any complaints from angry parents. ...read more.

She has also put some words into italics, to emphasise its gimmicky nature, or in the case of 'Old Man, Old Man' the seriousness of her feelings. Using gimmicks, and humour as one of her styles have really made her poems enjoyable to read, and they were probably enjoyable for her to write. U A Fanthorpe seems like a new poet that has thrown away the poem manual, and went ahead to express her self in the way that she enjoys the most. 'Old Man, Old Man' may not fully reflect this because it was a serious poem based on a painful experience. But there is still a small amount of gimmicky element to it, in particular, the way she gladly describes how ageism had affected his quality of life. My favourite poem would have to be 'Not My Best Side'. I found this poem to be the most amusing so far. The way Fanthorpe turned an odd looking painting into an entertaining piece of text was incredible. It shows that poems do not necessarily have to be personal to you; they can also be thoughts or opinions. Most people would probably look at that painting and take a dim view to it, but Fanthorpe has used this as an inspiration to make it funny. If this was given to someone to describe, they would probably say the same things to what were mentioned in the poem, but Fanthorpe has captured this description, altered it into a different style as though the characters in the picture were saying them, and wrote an imaginative, and funny poem from it. Fanthorpe has written poems on unusual and odd things, anything that would enable her to practice her individual, and quirky treatment on. They are normally exaggerated events that have taken place during her life. To someone who is not into poems, like myself, I would definitely recommend poems by Fanthorpe, as they would show that poems do not have to be written in the way that we are all familiar with. ...read more.