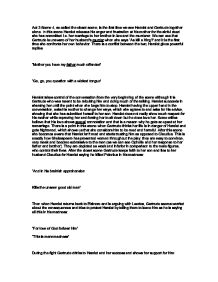 Act 3 Scene 4, so called the closet scene, is the first time we see Hamlet and Gertrude together alone. In this scene Hamlet releases his anger and frustration at his mother for the sinful deed she has committed i.e. her marriage to her brother-in-law and the murderer. We can see that Gertrude is unaware of her husband's murder when she says `As kill a King?' and it is the first time she confronts her own behavior. There is a conflict between the two; Hamlet gives powerful replies `Mother you have my father much offended' `Go, go, you question with a wicked tongue' Hamlet takes control of the conversation from the very beginning of the scene although it is Gertrude who was meant to be rebuking him and doing much of the talking. Hamlet succeeds in shaming her until the point when she begs him to stop. Hamlet having the upper hand in the conversation, asks his mother to change her ways, which she agrees to and asks for his advice, showing that she has submitted herself to her son. Hamlet does not really show much respect for his mother while reproving her and forcing her to sit down but he does love her. Some critics believe that his love shows s****l connotation and that is a reason why he gets so upset at her remarriage. There is a point in this scene when Gertrude thinks her life is in danger of Hamlet and gets frightened, which shows us that she considers him to be mad and harmful. ...read more.

I would like the audience to be shocked, by this and feel on edge as this scene is all about whether Hamlet will kill the king or not which is very tense. Since Claudius is a King in Shakespeare's Hamlet I would like him to play someone of high importance, so I would have him being played as a gangster leader. The outfit I would like him to wear would be a grey Armani suit, a waistcoat, blue collared shirt, and patent leather shoes. I would like him to have square framed glasses and for him to wear lots of gold jewellery, but especially a gold signant ring to symbolise that he is the leader of a gang, which has resemblance to the fact that he is a king (monarchs wear a ring to show that they are married to their country). I would like Hamlet to be wearing rather informal clothes to show that he may have gone slightly mad. I would have him wearing a plain black shirt, which would be reasonably tight. I would then have him wearing a black Hawaiian shirt with a thatched pattern on it. I would also like him to be wearing dark blue jeans. The dark clothes would be symbolising that Hamlet is still in mourning for his father's death. I would like Hamlet to be wearing a silver Saint Christopher around his neck, to show that Hamlet may need guidance for the revenge of his father's death. ...read more.

I feel that Hamlet would be imagining Claudius being killed and going straight to h**l, which would make him very happy. I then think that when Hamlet delivers this last line, "this physic but prolongs thy sickly days". It must be emphasised as Hamlet would be feeling quite sad and angry that he has Claudius in very vulnerable position yet he feels that he cannot kill him, as that would not give him true revenge. I feel that sadness and anger can be portrayed by Hamlet having a pause between physic and but. Also the actor should speak in a low tone to get the audience' attention as this line displays the irony as Claudius is unable to pray. This scene is only effective because the audience knows what happened in the previous scene. They know that Claudius has portrayed his true guilt to Hamlet, confirming Hamlet's beliefs that Claudius killed his father. The way in which he did show his guilt, (When the players put on a play with a murder committed the same way that he killed his brother) would be more effective in Shakespeare's time as then all people who committed murder were believed to go mad, and be affected by the site of their crime. When Claudius views his crime he horrified by himself and feels the need to be forgiven which explains his sudden desperate need to pray. I feel that this scene gives Hamlet its edge of tenseness. The rest of the play is an unwinding tale leaving the audience wondering right until the last scene, will Hamlet kill Claudius? ...read more.