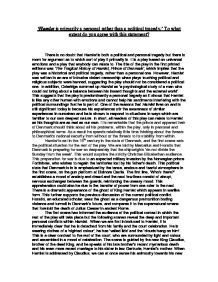 'Hamlet is primarily a personal rather than a political tragedy' - To what extent do you agree with this statement?

'Hamlet is primarily a personal rather than a political tragedy.' To what extent do you agree with this statement? There is no doubt that Hamlet is both a political and personal tragedy but there is room for argument as to which sort of play it primarily is. It is a play based on universal emotions and a play that anybody can relate to. The title of the play in the first printed editions was 'The Tragical History of Hamlet, Prince of Denmark', which implies that the play was a historical and political tragedy, rather than a personal one. However, Hamlet was written in an era of intrusive violent censorship when plays touching political and religious subjects were banned, suggesting the play should not be considered a political one. In addition, Coleridge summed up Hamlet as 'a psychological study of a man who could not bring about a balance between his inward thoughts and the external world'. This suggests that the play is predominantly a personal tragedy as it shows that Hamlet is like any other human with emotions and cannot help his sentiments interfering with the political surroundings that he is part of. One of the reasons that Hamlet lives on and is still significant today is because his experiences stir the awareness of similar experiences in ourselves and he is shown to respond to situations in ways which are familiar to our own deepest nature. ...read more.

Once alone on stage, Shakespeare uses a soliloquy to share Hamlet's feelings with the audience. We can quickly see that Hamlet is in a state of mental distress. His broken disjointed speech, frequently being distracted by disgust and anger, shows his pain and confusion at his family situation. This soliloquy tells us of Hamlet's adoration of his 'hyperion' father, and even more so, his fury at his mother's instant and incestuous marriage to her husband's brother, with the bitter exclamations, 'O God! A beast that wants discourse of reason would have mourned longer. Hamlet's speech also serves to highlight his impressions of the society that he lives in. It is 'an unweeded garden' and he points out that if it were not a divine law made by God, he would resort to suicide. This shows that Hamlet is refusing to go along with the rest of the court for the sake of his own stability. When confronted by the ghost of his late father, Hamlet is appalled at the revelation that his father has been murdered and even more so when he finds out it was Claudius who has committed this 'foul and most unnatural murder'. He hastily commits himself to get revenge on his uncle 'with wings as swift as meditation or the thoughts of love'. ...read more.

When confronted by death and the nature of human mortality in the graveyard scene, Hamlet handles the skull of Yorick, his childhood jester and sees everything in a wider perspective. The scene represents the realization of human mortality; no matter whether a man is a warrior or an ordinary person, he will eventually be reduced to dust. Hamlet celebrates this emancipation by announcing 'this is I, Hamlet the Dane', finally claiming the name as his own, accepting who he is and accepting his destiny. From this point forth, Hamlet is no longer driven by revenge, but acts according to his own moral principles, and even the murder of Claudius is vengeance for his own imminent death, rather than that of his father. In the final scene, the theme of revenge and justice reaches its conclusion when Hamlet finally kills Claudius. Hamlet's desire to attain Laertes' forgiveness represents an important shift in his mental state and he accepts death by saying 'let go; by heaven, I'll have't'. At the end of the scene, the arrival of Fortinbras effectively poses the question of political legitimacy once again, as did the opening scene of the play. Returning to the statement, even though Hamlet is in one sense political, it is the personal matters that dominate the play and the audience is now left, saddened by the tragic death of a fine and moral human being with whom they have connected with throughout the play. Bibliography Berman, Ronald. ...read more.