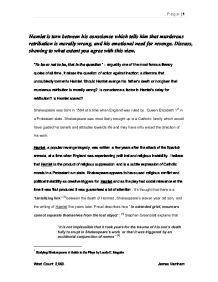 Hamlet is torn between his conscience which tells him that murderous retribution is morally wrong, and his emotional need for revenge. Discuss, showing to what extent you agree with this view.

Hamlet is torn between his conscience which tells him that murderous retribution is morally wrong, and his emotional need for revenge. Discuss, showing to what extent you agree with this view. "To be or not to be, that is the question" - arguably one of the most famous literary quotes of all time, it raises the question of action against inaction; a dilemma that undoubtedly torments Hamlet. Should Hamlet avenge his father's death or not given that murderous retribution is morally wrong? Is conscience a factor in Hamlet's delay for retribution? Is Hamlet scared? Shakespeare was born in 1564 at a time when England was ruled by Queen Elizabeth 1st in a Protestant state. Shakespeare was most likely brought up in a Catholic family which would have guided his beliefs and attitudes towards life and may have influenced the direction of his work. Hamlet, a popular revenge tragedy, was written a few years after the attack of the Spanish armada, at a time when England was experiencing political and religious instability. I believe that Hamlet is the product of religious suppression and is a subtle expression of Catholic morals in a Protestant run state. Shakespeare appears to have used religious conflict and political instability as creative triggers for Hamlet and as the play had social relevance at the time it was first produced it was guaranteed a lot of attention. It's thought that there is a "tantalizing link" [1] between the death of Hamnet, Shakespeare's eleven year old son, and the writing of Hamlet five years later. ...read more.

After noticing Claudius' distress at the play "Give me some light. Away!"[Act 3 Scene 2 - 244] Hamlet is convinced that the ghost speaks the truth "I'll take the ghost's word for a thousand points."[Act 3 Scene 2 - 260 - 261] and therefore in his own mind justified for killing the king. With this revelation Hamlet goes to find the King whom he finds praying at his private chapel. Realising that killing Claudius at this point would send him straight to heaven "A villain kills my father, and for that, I his sole son do this same villain send to heaven."[Act 3 Scene 3 - 76 - 78] and that this is no sort of justice, Hamlet is again torn between his need for revenge and his conscience. He is ready to take his revenge but delays in fear of sending his uncle to heaven which would not be the justice he wants. Hamlet decides to wait until Claudius is in the act of committing a sin because only then can he guarantee him being sent to h**l. The above paragraphs illustrate points of conflict for Hamlet, showing how he is torn between his desire for revenge and his conscience. Each point gives support to the notion that Hamlet's conscience is a factor in his delay for retribution and that he considers the religious implications of his actions. I believe that Hamlet's delay in response could also be attributed to the fact that murder is out of character and that he is likely to be scared at the prospect of killing someone. ...read more.

Each point of conflict furthers Hamlet's desolation until his final conflict which resulted in everyone dying. John Lawlor suggests that murder is out of character. It is Hamlet's greatest conflict to overcome, with accepting that it is a suitable form of justice, given that Hamlet believes Claudius murdered his father. It is perhaps only after Hamlet kills Polonius, thinking he was Claudius, that Hamlet's guilt overcomes any religious considerations. It is however, I believe the point of the death of all the main characters to be a lesson by Shakespeare to warn of the dangers of denying Catholicism. It is perhaps a message from Shakespeare to all the people of England to protect their religion that he ends with "The sight is dismal, and our affairs from England come too late." [Act 5 Scene 2 - 246 - 347] Or rather 'affairs of England' come too late for Hamnet. Although Bacon and Freud both provide compelling arguments, neither seem to overcome the fact that Hamlet does demonstrate a conflict within conscience at several of the points within the play which I have addressed. My in-depth analysis of the text allowed me to identify strong argument in support of the essay statement. It is for this reason and the above paragraph that I agree with the suggestion that Hamlet is torn between his conscience which tells him that murderous retribution is morally wrong, and his emotional need for revenge. ...read more.