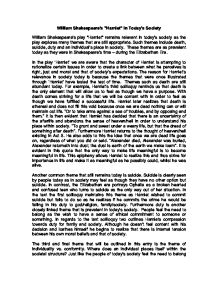 William Shakespeare's "Hamlet" in Today's Society William Shakespeare's play "Hamlet" remains relevant in today's society as the play explores many themes that are still appropriate. Such themes include death, suicide, duty and an individual's place in society. These themes are as prevalent today as they were in Shakespeare's time - during the Elizabethan Era. In the play 'Hamlet' we are aware that the character of Hamlet is attempting to rationalize certain issues in order to create a link between what he perceives is right, just and moral and that of society's expectations. The reason for Hamlet's relevance in society today is because the themes that were once illustrated through 'Hamlet' have lasted the test of time. Themes such as death are still abundant today. ...read more.

He also adds to this the idea that once we are dead life goes on, regardless of what you did or said. "Alexander died, Alexander was buried, Alexander returneth into dust; the dust is earth of the earth we make loam". It is evident in this quote that the only way to make life meaningful is to become meaningful in life. This epiphany allows Hamlet to realize this and thus strive for importance in life and make it as meaningful as he possibly could, whilst he was alive. Another common theme that still remains today is suicide. Suicide is clearly seen by people today as in society may feel as though they have no other option but suicide. In contrast, the Elizabethan era portrays Ophelia as a broken hearted and confused teen who turns to suicide as the only way out of her situation. ...read more.

Just like the people of today's society feel the need to belong to something or someone in order to create meaning in our life Hamlet also felt this need. "Alexander died, Alexander was buried, Alexander returneth into dust." He feels if we need to make a meaning in life otherwise we will become nothing due to death. He is constantly struggling between commitment to self and that of society. His actions reflected this as he wasn't able to move away from societal expectations thus prolonging the murder of Claudius and creating the "Tragedy of Hamlet". With the themes evident in Hamlet and the similarities with today's society there is no argument that Hamlet can be irrelevant. As shown in this entry there are many issues that reflect that of today's society. Although the context has changed the themes have lasted the tests of time thus allowing "Hamlet" to be as relevant today as when it was written. ...read more.