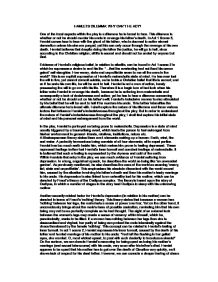 Hamlets dilemma - Why can't he act?

HAMLETS DILEMMA: WHY CAN'T HE ACT? One of the focal aspects within the play is a dilemma he is forced to face. This dilemma is whether or not he should murder his uncle to revenge his father's death. In Act 1 Scene 5, Hamlet comes face to face with the ghost of his father, who is doomed to suffer eternal damnation unless his sins are purged; yet this can only occur through the revenge of his own death. Hamlet believes that despite doing his father the justice, he will go to h**l, since according to the Christian religion; all life is sacred and should not be ended by anyone but God. Evidence of Hamlet's religious belief, in relation to afterlife, can be found in Act 1 scene 2 in which he expresses a desire to end his life: "...that the everlasting had not fixed his canon gainst' self-slaughter. How weary, stale and unprofitable seem to me all the uses in the world!" This is an explicit expression of Hamlet's melancholic state of mind. He has near lost the will to live, yet cannot commit suicide, as he holds a Christian belief that life is sacred; and so if he ends his own life, he will be sent to h**l. Hamlet is not a man of action, barely possessing the will to go on with his life. Therefore it is a tragic turn of bad luck when his father asks Hamlet to revenge his death, because he is suffering from melancholia and consequently a lack of decisiveness and action; yet he has to face a dilemma concerning whether or not he should act on his father's will. ...read more.

However, we can connote a deeper feeling of chaos felt by Hamlet at the thought of his mother sleeping with another man. By society's standards of the time, it was considered scandalous for a woman to reveal herself capable of desire. Hamlet's Oedipus complex causes him to suffer intense s****l jealously at observing s****l desire in his mother, especially because that desire is not for Hamlet himself, but for another man. Among others, this is the sort of psychology that constitutes Hamlet's inner turmoil, which his initial prone to indecisiveness and inability to act is a symptom of. Hamlet's melancholia and inability to act is a crucial flaw in Hamlet's character and according to Aristotle; it is essential to the progression of the plot. According to Aristotle's theory, in revenge tragedy there is a tragic flaw in the hero (main protagonist), which to an extent undermines his/her purpose as the tragic hero of the play. As previously mentioned, Hamlet's purpose is to revenge his father's death. However, because he suffers from depression, he has not the personal conviction to commit to any form of action. Throughout the play he is contemplating whether or not he should murder his uncle to revenge his father's death, believing that if he does, he will surely go to h**l. This creates an enormous dilemma: Hamlet either revenges his father's death, subsequently freeing his father from purgatory whilst Hamlet himself goes to h**l; or he decides not to kill his uncle, saving his own soul whilst leaving his father to face eternal damnation. ...read more.

whilst praying/repenting, that person may not end up in purgatory- this uncertainty further adds to Hamlet's confusion over what action he should take, if any. My personal feeling is that Hamlet's religious fears and uncertainties intensify Hamlet's dilemma so strongly, that it is only natural that Hamlet is forced into action by a change in the plot or a moment in which Hamlet is pushed into a corner and has to act- I am referring to Act 5 Scene 2 in the play, in which the King and Laertes plot to kill Hamlet by putting poison on the tip of the sword, or alternatively, by handing him a drink of poison of the former plan fails. The scene takes a crucial turn when the Queen drinks from the cup, in respect to Hamlet's health. She dies, and then Laertes blames the King. It is only at this point that Hamlet is fuelled into a course of action that he would have otherwise felt too indecisive to take. Hamlet of course kills his father in revenge of his mother as well as his father. This scene is an essential device in providing a logical conclusion to the play. Without being fuelled into such a vengeful rage, it is likely that the time taken for Hamlet to commit any action could not be married with any suitable duration of time a play should last for! On this note, I conclude that Hamlet's dilemma, influenced by his fears; depression and indecisiveness could not be logically resolved on his own exclusive decision to act. ...read more.