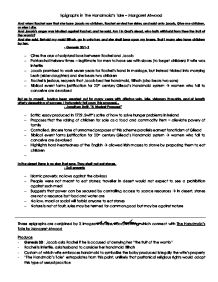 Epigraphs in The Handmaid's Tale - Margaret Atwood And when Rachel saw that she bare Jacob no children, Rachel envied her sister, and said unto Jacob, Give me children, or else I die. And Jacob's anger was kindled against Rachel; and he said, Am I in God's stead, who hath withheld from thee the fruit of the womb? And she said, Behold my maid Bilhah, go in unto her; and she shall bear upon my knees, that I many also have children by her. - Genesis 30:1-3 * Cites the crux of scriptural love between Rachel and Jacob * Patriarchal Hebrew times = legitimate for men to have s*x with slaves (to beget children) if wife was infertile * Jacob promised to work seven years for Rachel's hand in marriage, but instead tricked into marrying Leah (elder daughter) and she bears two children * Rachel is jealous, requests that Jacob bed her handmaid, Bilhah (also bears two sons) * Biblical event forms justification for 20th century Gilead's Handmaid system --> women who fail to conceive are devalued But as to myself, having been wearied out for many years with offering vain, idle, visionary thoughts, and at length utterly despairing of success, I fortunately fell upon this proposal... ...read more.

be termed for common good but may be against nature Three epigraphs are conjoined by 3 images: Produce, Food, Eating which connect with The Handmaid's Tale by Maragret Atwood Produce - Genesis 30 : Jacob asks Rachel if he is accused of denying her "the fruit of the womb" - Rachel is infertile, asks husband to consider her handmaid Bilhah - Custom of which wife embraces handmaid to symbolize the baby produced is legally the wife's property - "The Handmaid's Tale" extrapolates from this point, unlikely that puritanical religious rights would adopt this type of s****l practice - Atwood depicts that patriarchal traditions which depict women as means of soley reproduction is no different than modern customs of labelling women as s*x objects - Selective use of quote from Old Testament illustrates how dangerous it is to take single quotes from the Bible without putting them in proper context --> misused for purpose of pushing particulate agenda - Handmaids were suppressed of civil rights and Bible is referred to in novel without proper citation Food/Eating - Jonathan Swift : Children are proposed as means of consumption to elimiate poverty - "Unbabies" sent to colonies due to undesired traits, ...read more.

Jacob makes it clear that Rachel is "withheld from fruit of the womb", where he degrades Rachel. This signifies the act of sending an "unwoman" to the Colonies, where she is forced to be dispatched to toxic clean-up crews if she does not produce in a given time. Eating children to reduce poverty occurs when there is an overpopulation of offspring, or that a family is in poverty. This practice is suggested by Jonathan Swift, where he supports cannibalism. This belief is the exact opposite of the rules in the Republic of Gilead, where babies were not common and infertile women had to turn to handmaids for reproduction. To have a baby meant a way out of oppression from other people and it meant to never be labelled an "unwoman", therefore not being sent to the Colonies. As seen by all the commanders and hierarchies in The Handmaid's Tale, the handmaids are controlled and kept from many things other than shopping for produce. They were not allowed to read or make eye contact with other males. The fact that the quote suggests that power can be secured by controlling access to scarce resources, by taking away privileges and things handmaids can connect to; they have absolute power. ...read more.