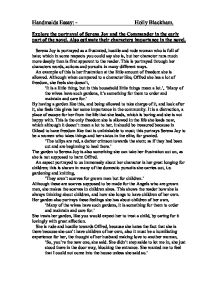 Handmaids - Explore the portrayal of Serena Joy and the Commander in the early part of the novel. Also estimate their characters importance in the novel.

Handmaids Essay: - Holly Blackham. Explore the portrayal of Serena Joy and the Commander in the early part of the novel. Also estimate their characters importance in the novel. Serena Joy is portrayed as a frustrated, hostile and rude woman who is full of hate; which in some respects you could say she is, but her character runs much more deeply than is first apparent to the reader. This is portrayed through her characters words, actions and pursuits in many different ways. An example of this is her frustration at the little amount of freedom she is allowed. Although when compared to a character like, Offred she has a lot of freedom, she feels she doesn't, 'It is a little thing, but in this household little things mean a lot.', 'Many of the wives have such gardens, it's something for them to order and maintain and care for.' By having a garden like this, and being allowed to take charge of it, and look after it, she feels this gives her some importance in the community. ...read more.

She is rude and hostile towards Offred, because she hates the fact that she is there because she can't have children of her own, also it must be a humiliating experience for her, the thought of her husband making love to another woman, 'So, you're the new one, she said. She didn't step aside to let me in, she just stood there in the door way, blocking the entrance. She wanted me to feel that I could not come into the house unless she said so.' This is where the reader, feels a little compassion for Serena Joy, as she is portrayed as an awful women, who really has bought this predicament on herself; but it must be humiliating for her. Her husband is sleeping with another women, and as far as she is concerned it is because she cannot have children. She also knows that this life that she has helped to promote, is awful and she hates the way in which she has to live now. ...read more.

Everyone watches him and wants to be him, which shows he is influential, this though is just because of the power, importance and freedom he has, which all the other characters can only dream about. The first description we get of the Commander portrays him as a very ordinary looking man, 'When you get down as far as the chin he looks like a vodka ad, in a glossy magazine, of times gone by.' He looks like a friendly approachable man, which slightly contradicts the mysterious feel he has portrayed at the very beginning of the novel. As they are both characters of great power within the society, I feel they are very important in the novel as a whole, and as the book goes on their importance will increase. They are both very strong characters, and both feel that they are hard done by compared to how they used to live but they aren't when compared to characters like Offred. This is also true of many people in the world today. They are two characters in the novel who care only for themselves and nobody else, even though they are very lucky with what they have. ...read more.