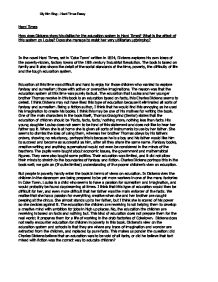 Hard Times How does Dickens show his dislike for the education system in Hard Times? What is the effect of this system on Louisa? Does she manage to resist her very utilitarian upbringing? In the novel Hard Times, set in 'Coke Town' written in 1854, Dickens explores his own ideas of the poverty-ridden, factory towns of the 19th century Industrial Revolution. The book is based on family and it also shows the detail of the social standards of the time, poverty, the difficulty of life and the tough education system. Education at this time was difficult and hard to enjoy for those children who wanted to explore fantasy and surrealism; those with active or overactive imaginations. The reason was that the education system at this time was purely factual. The education that Louisa and her younger brother Thomas receive in this book is an education based on facts, this Charles Dickens seems to detest. I think Dickens may not have liked this type of education because it eliminated all sorts of fantasy and surrealism. Being a fiction author, I think that he would find this annoying as he used his imagination to create his books. I think this may be one of his motives for writing the book. One of the main characters in the book itself, Thomas Gradgrind (Senior) states that the education of children should be 'Facts, facts, facts,' nothing more, nothing less than facts. ...read more.

We see her frustration towards her father and society as a whole grow and develop throughout each part of the book. Dickens makes the reader question Gradgrind's method of teaching and education and lets the reader decide if it is right or wrong by the evidence Dickens gradually reveals during the course of the book. Charles Dickens creates a character whose teaching methods are quite different from the education system these days. Dickens has created a character, which is disliked by many, both in attitude and appearance. Gradgrind is described to be 'square.' 'Square wall of a forehead' Dickens has used this imagery so the reader perceives Gradgrind as a very dull and square character. Dickens has described Gradgrind as a square man as it forces you to imagine a man with boundaries, and four straight walls with equal sides, nothing more nothing less. In this way he portrays Gradgrind as a formal man, which helps you with the impression that he is a man of facts. Each chapter is cleverly titled. They give us insight into Dickens view of the events taking place in that specific chapter. 'Murdering the innocents' is an example of Dickens putting his view into the titles. This is a clear indication that he thinks the planting of facts and the lack of imagination involved is not good and is not right. ...read more.

He uses subtle descriptions and techniques, which make the reader agree with his opinions. The way he uses chapter titles and characters names, the way Sissy and Louisa struggle through the system all add to your understanding of Dickens views. From the beginning of the book till the end, Louisa shows signs of wanting to explore the unknown, fantasy and fiction, but because of the current education system and her father being at the head of it, Louisa struggles to do this. Louisa finds that she cannot suppress her imagination whilst maintaining the rules of the system, and as she grows up she finds it easier to stand up to her father. Throughout the book, Louisa does anything to please her brother because of the factor of male dominance: she will try and get him out of trouble and help him as much as she can. In a way she almost sees him as an older brother, or someone to look out for, who may in turn look out for her. At the end, she finally becomes loose of the shackles and facts that are binding her and can express herself imaginatively and creatively. Thomas Gradgrind Louisa both have incredibly opposite opinions. They grow together throughout the book and although Gradgrind is the main enforcer of facts, his daughter Louisa opens his eyes to the fact that imagination, creativity and fantasy are to be embraced in the education system, and not abolished from the minds of the young. Lily Kim Sing - Hard Times Essay ...read more.