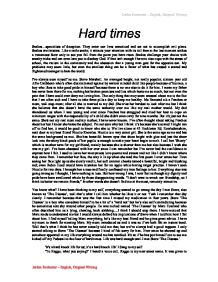 Hard times Snakes....specialists of deception. They enter our lives unnoticed and set out to accomplish evil plans. Snakes are twisters. Like a rattle snake, it attracts your attention with its tail then at the last moment strikes a venomous blow only to see you fall from the point you have risen. Snakes challenge your choice with sneaky tricks and can even lure you to disobey God. If that isn't enough I have to also cope with the stress of school, the r****m in the community and the obsession that a young man gets for the opposite s*x. My problems may seem little, but even the smallest thing can be a factor of what has caused a scared and frightened teenager to hate the world. I've always seen myself as me. Steve Marshall. An averaged height, not really popular, sixteen year old Afro-Caribbean who's often discriminated against by narrow minded child like people because of his race, a boy who likes to take good pride in himself because there is no-one else to do it for him. I mean my father has never been there for me, nothing but broken promises and lies which hurts me so much, but not even the pain that I bare could ever deny me loving him. The only thing that may seem unusual about me is the fact that I am often sick and I have to take three pills a day to keep me healthy. Ms Ramstad a.k.a Peaches or mum, well step-mum; after all she is married to my dad. She tries her hardest to look after me but I think she believes that she doesn't have the same authority over me like my real mother would. My dad abandoned us when I was young and ever since Peaches has struggled and tried her best to cope on minimum wages with the responsibility of a child she didn't even carry for nine months. ...read more.

We all know that the six formers have been running the school ever since we can remember. Some of us get bullied, kicked, punch and even sat on. I think that it's about time we now came together and formed a strong gang. A gang like no other. A gang called "Rowels Dans" Rowels so people know we come from Rowlsdemshire and Dans so people know to have respect or else. Plus I know from my previous gang that it is a sure way to get girls.' I knew that Steve the disease mainly persuaded me with the 'girls' statement so I thought it would be a sure winner for these guys. I wasn't wrong. Everyone except Martin Hunter agreed. I think that's because he had too much to loose with his football and all. At least three days went past and we had started terrorising shops, people on the streets, other schools and we even started to get our own back on the six formers. Not only that, our gang increased in size with additions of people like Ray Stone, the captain of the wrestling team. The more and more we did wrong the more the name 'Rowels Dans' was talked about. I had a successful gang which was helped run by my advocate, Steve. He helped me make tough decisions and instructed me on what to do. Everything was going right. Nicolie got much closer to me the more and more I played the hard man. Just like Steve. It was hard to not portray myself like him but it seems to be the kind of man she really likes. It was around the fifth day when things really started to fall apart. The night before Steve told me to take Nicolie to the lake and go skinny dipping. He told me not to tell her where we were going because she might not agree at first. ...read more.

All that thinking made my head hurt but it's the reason why I am writing this. This is my letter for the 'entire world' to read. So everyone can at least understand what I am going through. It will be left hopefully, for my children, my children's children and for anyone else whose life is sad enough to wonder what ever happened to 'Steve Marshall'. Think about it. My sickness got the best of me. For those that haven't realized it yet. When I was younger I was diagnosed mentally ill. I think that's why Peaches introduced me to Marc Towland my Psychiatric, and that's also what all the pills where for, to keep illusions like Steve 'the disease' out of my life. Up until the day I missed my medication and he turned up. But I still don't understand why Steve 'the disease' just disappeared. Maybe he got fed up of me, maybe my illness got better or just maybe they injected my pills into my body every time the nurse came round to mentally scar me with those huge needles. No way, that would have never happened, but I do give it to Steve the disease he was successful in his mission. He was the toughest snake my life has ever handled, and the biggest factor to my demise. Yes that's right my demise. He has knocked me off my Pedestal and climbed right up. That can only mean that he has successfully taken my place. He should be me. Well everything I ever wanted to be. Now I have realized that the world is full of lying cheating and backstabbing people, so who can blame a broken teenager for hating the world. Even though he isn't here now Steve the disease belongs in this world not me. So this is the last chapter in the diary of my life. The life of Steve Marshall before I commit the tragic event called suicide. I really can't go on through all these HARDTIMES. Jordan Rochester - English, Original Writing Jordan Rochester - English, Original Writing ...read more.