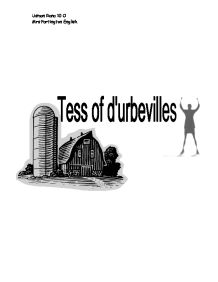 Hardy's objective was simple; to show the treatment of women at the time of release. Hardy uses Tess as the main character motivating the theme. She has a troublesome time trying to socialise with men

Tess of d'urbevilles is a moving novel about challenging relationships and moral struggles. Tess of d'urbevilles was published in 1891 in the imaginary "Wessex" which is based on Dorset. Hardy's objective was simple; to show the treatment of women at the time of release. Hardy uses Tess as the main character motivating the theme. She has a troublesome time trying to socialise with men. Hardy also introduces religion and nature in the novel. The author shows contradictory views of religion and what people would have had. A noticeable used by hardy is the (setting) nature. He links nature strongly to women and tries to prove "women are more closely linked to nature than men". Later on in the novel hardy mentions the agricultural revolution, here he puts forward his own opinion, and he claims that the machine development is taking over manual jobs usually done by humans e.g. the threshing machine causing havoc. Tess is shown as parcel which is being passed around as she commutes to various places in the course of the novel. Tess uses this opportunities to use the setting to reflect Tess's life and emotions. E.g. Tess went to Talbathoys in search of a new begging and hardy echo her thought using positive and fresh images such as "Hazy sunlight", whereas in Flinctomb-Ash he portrays a ever darkening images. These are two places that play a major part in Tess's life. ...read more.

The particular quote shows spring, start of new life and Tess' life. "She felt akin to the landscape." This shows us that she is already feeling at home. "White-coated animals returned to the in rays almost dazzling." The colours of the animals show purity. "From waters were clear as the pure River of Life." The rivers of Talbothay are new and fresh for her. This completely new place lifts her spirits after her dark past. Mentioning her dark past, during the chapter, Hardy refers to a "dark patch". "Not so very far to the left of her, she could discern a dark patch in the scenery..." This "dark patch" reflects to her past, her ancestors. Before she arrived at Talbothay she went past the graveyard of her ancestors. Hardy refers to the dark patch because the graveyard was dark, but it mainly reminded her that, her ancestors led her to a terrible life, her ancestors were the reason for her not being wealthy, and the reason Alec Durbeyfield raped her. "Not quite sure of her direction, Tess stood still upon the hemmed expanse of verdant flatness, like a fly on a billiard-table of indefinite length and of no more consequence to the surroundings than that fly." Despite the dark patch, Hardy uses the previous quote to attract the reader; the use of the language in the text is amazing. Hardy compares Tess to a fly, and the land to a billiard table. ...read more.

If you judge the threshing machine to a tyrant, a tyrant makes his people work hard, makes them sweat until the last drop, in a way, this is what the threshing machine does to the workers. Working with the threshing machine, you really put your bones and flesh into completing your job, helping you get stronger and keeping your muscles working. So really, the working conditions of the men and women are tough, yet the workers work hard in order to complete their job. In conclusion I think that hardy has used imaginative settings to portray his message about woman quite appropriately and the settings were well placed in accordance to the storyline. The setting is used well in transitions. I believe this use of technique has brought a tedious tale to life. The language he uses. Hardy's description of the scenery reflect Tess' feelings not just accurately, but brilliantly. Talbothay brought out a positive image towards her, making her feelings extremely happy, while in Flintcomb-Ash, her feelings are extremely upsetting as Hardy uses nature to predict this. Towards the ending of the novel, Hardy mentions the Stonehenge. As Hardy refers to Pagan religion throughout the novel, for example, Heliolatries, sun worshippers, and that woman are tied into nature. This ties together, Pagan religion -which celebrates nature. This comes to a appropriate conclusion with the fact that Tess feels totally at ease in Stonehenge - a place of Pagan worship I believe this use of technique has brought a tedious tale to life. ?? ?? ?? ?? Usman Rana 10 O Mrs Partington English ...read more.