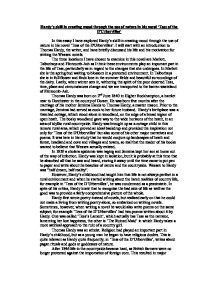 Hardy's skill in creating mood through the use of nature in his novel 'Tess of the D'Urbervilles' In this essay I have explored Hardy's skill in creating mood through the use of nature in his novel 'Tess of the D'Urbervilles'. I will start with an introduction to Thomas Hardy, the writer, and have briefly discussed his life and his motivation for writing the Wessex novels. The three locations I have chosen to examine in this novel are Marlott, Talbothays and Flintcomb-Ash as I think these environments play an important part in the life of Tess, particularly as in regard to the changes that she undergoes. In Marlott she is the spring bud waiting to blossom in a protected environment. In Talbothays she is in full flower and finds love in the summer fields and beautiful surroundings of the dairy. Lastly, when winter sets in, withering the spirit of the poor deserted Tess, time, place and circumstances change and we are transported to the barren wasteland of Flintcomb-Ash. Thomas Hardy was born on 2nd June 1840 in Higher Bockhampton, a hamlet near to Dorchester in the county of Dorset. He was born five months after the marriage of his mother Jemima Hands to Thomas Hardy, a master mason. Prior to the marriage, Jemima had served as cook to her future husband. Hardy's birthplace was a thatched cottage, which stood alone in woodland, on the edge of a broad region of open heath. The bosky woodland gave way to the wide horizons of the heath, in an area of idyllic rural countryside. Hardy was brought up as a cottage child in this remote rural area, which proved an ideal backdrop and provided the inspiration not only for 'Tess of the D'Urbervilles' but also some of his other major narratives and poems. It was here in his study that he would conjure up landscapes of heath and forest, headland and cove and villages and towns, so real that the reader of his books wanted to believe that Wessex actually existed. ...read more.

When Tess follows Angel's music, Hardy use a simile to liken her to a fascinated bird who is drawn to the music and Angel almost hypnotically "..as she listened Tess, like a fascinated bird could not leave the spot. Far from leaving she drew up towards the performer...". She is also, later in the passage, described as a cat "she went stealthily as a cat through this profusion of growth." The scene occurs at dusk, which heightens the suspense; it is also very earthy and sensual. " The outskirt of the garden in which Tess found herself has been left uncultivated for some years and was now dank and rank with juicy grass which sent up mists of pollen at a touch; and with tall blooming weeds emitting offensive smells - weeds whose red and yellow and purple hues formed a polychrome as dazzling as that of cultivated flowers...gathering cuckoo-spittle on her skirts, cracking snails that are underfoot, staining her hands with thistle-milk and slug slime and rubbing off upon her naked arms sticky blights which, though snow white on the apple-tree trunks, made madder stains on her skin". The scene Hardy created is very luxurious and he makes keen uses of the senses, for example "with tall blooming weeds emitting offensive smells". Hardy's use of the pollen is also very visual, as when you think of pollen, you tend to think of fertility, life and energy. It is brimming with life and colour, a profusion in its most glorious and rawest forms and the sexual imagery is abundant. She finds herself in the part of the garden, which has been left uncultivated for years. This is a comparison with Tess's life after the birth and loss of her child. There is almost a ripeness of his description of nature, cuckoo spittle, cracking snails, offensive smells, slug slime. This could be quite a repulsive description, but it shows a place teeming with life, and beautiful in its essence. ...read more.

Even though the farm had so many faults like the weather and the appearance, Tess only really talks of her despise of the farm and her wish to leave it because of the machinery there. This machinery was new to the farming community as it was the start of the industrial revolution and many of the workers were not used to it. "It was the ceaselessness of the work which tried her so severely, and began to make her wish that she had never come to Flintcomb-Ash". Hardy, in the way he describes the machines, depicts them as a blight on the environment. He sees them as spoiling nature and the beauty and tranquillity of the land. In his view, machines will only bring unhappiness and destruction. I think he gets this across in the way he parallels Tess's misery there. Hardy describes the machine as a "red tyrant", which projects an image of a monster bent on destruction. The colour red gives the impression of danger and death. The "tyrant" is unrelenting and it makes continuous demands on the workforce. They cannot rest and must keep pace with the machine and they cannot even communicate because of the overpowering noise. Tess is enslaved here by her poverty, her pride and her eagerness to take all the blame for Angel's desertion. In all three places, Hardy literally sets the scene with graphic description that immediately creates the mood of the place and gives an insight into the storyline, by its clever descriptions of nature, climate and season. He is conveying atmosphere and hidden emotion and his vivid descriptions of the environment are paralleled to the characters and the story. It is only when you start to analyse his words that you realise Hardy is leading you in a certain direction or putting you in a frame of mind relevant to the emotion of that particular part of the story. In this way I think he completely influences the unconscious mind of the reader and adds so much more enjoyment to the book. ...read more.