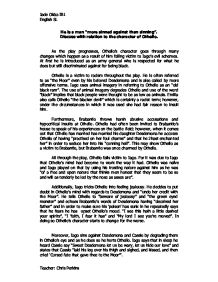 He is a man &quot;more sinned against than sinning&quot;.Discuss with relation to the character of Othello.

He is a man "more sinned against than sinning". Discuss with relation to the character of Othello. As the play progresses, Othello's character goes through many changes which happen as a result of him falling victim to Iago's evil schemes. At first he is introduced as an army general who is respected for what he does but still discriminated against for being black. Othello is a victim to racism throughout the play. He is often referred to as "the Moor" even by his beloved Desdemona and is also called by more offensive terms. Iago uses animal imagery in referring to Othello as an "old black ram". The use of animal imagery degrades Othello and use of the word "black" implies that black people were thought to be as low as animals. Emilia also calls Othello "the blacker devil" which is certainly a racist term; however, under the circumstances in which it was used she had fair reason to insult him. ...read more.

He tells Othello to "beware of jealousy" and "the green eyed monster" and echoes Brabantio's words of Desdemona having "deceived her father" and in order to make sure his 'poison' has sunk in he repeatedly says that he fears he has upset Othello's mood. "I see this hath a little dashed your spirits", "I 'faith, I fear it has" and "My lord I see you're moved". In doing so Othello's character starts to change for the worse. Moreover, Iago sins against Desdemona and Cassio by degrading them in Othello's eye and as he does so he hurts Othello. Iago says that in sleep he heard Cassio say "Sweet Desdemona let us be wary, let us hide our love" and states that Cassio "laid his leg over his thigh and sighed, and kissed, and then cried 'Cursed fate that gave thee to the Moor'". This causes Othello to be overrun with jealousy and anger and to no longer think clearly. ...read more.

He also realizes that he has changed and is no longer the man he once was as he says "he that was Othello" when he is referring to the murder of Desdemona. He wants to be remembered as the noble warrior Othello, who served the state and whose fault was loving too much, and who was na�ve in love; "Then you must speak of one that loved not wisely, but too well, of one not easily jealous". If one can be blamed for loving someone, trusting them and seeing the best in people, then Othello is guilty and the villain, but this is not a fault and Othello is therefore the victim. Othello contributed to his own downfall, but it was all instigated by evil Iago. He used Othello's trusting nature for his own means. It is Iago's fault that many lives were lost and that Othello felt the need to sacrifice Desdemona. Therefore, I think Othello was more sinned against than sinning and it was Iago who sinned against him most. Jade Okba IB1 English SL Teacher: Chris Perkins ...read more.

This essay responds to the task well. I personally interpret the quote as a claim that Othello's tragedy is caused by someone else, and this is the argument that this essay follows. I would note that there is not nearly ...

This essay responds to the task well. I personally interpret the quote as a claim that Othello's tragedy is caused by someone else, and this is the argument that this essay follows. I would note that there is not nearly enough analysis in this essay to reach the top marks. There needs to be close analysis of Iago's soliloquies and the change in Othello's language to prove that Iago causes his downfall. There is no discussion of audience response here, and so this essay cannot reach the top marks.

The analysis here is average. There is good knowledge of the play, with the essay being able to build an argument based on Iago's instigation of Othello's tragedy. However, despite the good use of quotations in this essay, none are analysed. There needs to be analysis of language, form and structure throughout to reach the top marks. I would be looking at the recurring metaphors used, or the imagery used by Iago which poisons Othello's mind. Then, once you have analysed these techniques, you can draw upon why Shakespeare has used them. There is a distinct lack of this here, and I would note that this is the most common downfall of GCSE essays. Students think that essays with good knowledge of the play will gain the top marks, but if there's no analysis then this won't happen. Without having an appreciation and exploration of the audience response, and how Shakespeare's techniques and craft affects this, you will not be given much credit. I would also note that this essay refers to characters as if they make their own choices. It is crucial that you show awareness that Shakespeare has constructed Othello, and chooses how to have him react on stage for dramatic effect. Once you get past this barrier, it'll become more natural to discuss why he has chosen to construct the play and its plot.

The essay has an okay structure. There is a clear introduction, but it doesn't really set up an argument. I would be making it clear that I am arguing that Othello's tragedy is caused by Iago here, rather than taking a while to make it to that point. The conclusion is fine, but as mentioned above there is no analysis of why Shakespeare uses this fact. There needs to be a discussion of the audience response and the effect on the play's receptions. Some of the ideas are a bit dotted about, also, with paragraphs being split when they should be put together to form a more concrete point. Ensuring you have a concise structure will allow your argument to flow. Paragraphs should never be one sentence, as it shows the inability to structure a good argument - a marking point at GCSE.