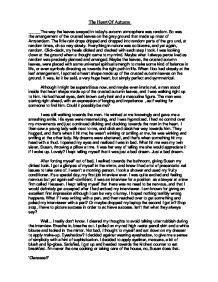 The Heart Of Autumn The way the leaves swayed in today's autumn atmosphere was random. So was the arrangement of the crusted leaves on the grey ground that made up most of Amsterdam. The little rain drops dripped and dropped into random parts of the ground, at random times, oh so very slowly. Everything in nature was so bizarre, and yet again, random. Click-clack, my heels clicked and clacked with each step I took. I was looking down at the ground when a thought came to my mind. Maybe what I always perceived as random was precisely planned and arranged. Maybe the leaves, the crusted autumn leaves, were placed with some universal spiritual strength to make some kind of balance in life, or even symbols directing us towards the right path in life. When I looked closely at the leaf arrangement, I spotted a heart shape made up of the crusted autumn leaves on the ground. It was, let it be said, a very huge heart, but simply perfect and symmetrical. Although I might be superstitious now, and maybe even irrational, a man stood inside that heart shape made up of the crusted autumn leaves, and I was walking right up to him. He had hazel eyes, dark brown curly hair and a masculine figure. The man was staring right ahead, with an expression of longing and impatience, as if waiting for someone to find him. Could it possibly be me? I was still walking towards the man. He winked at me knowingly and gave me a smashing smile. His eyes were mesmerizing, and I was hypnotized. I had no control over my movements and just continued clicking and clacking towards the man in the heart. I then saw a young lady walk next to me, and click and clack her way towards him. They hugged, and that's when it hit me; he wasn't winking or smiling at me, he was winking and smiling at the other lady. ...read more.

'No one is sitting here, you can sit' He apologized and said there were no more chairs but when I looked around I spotted two unoccupied tables and knew he sat with me because he wanted to sit with me in particular. Although it should have been awkward and I should have been both worried and nervous, everything was very easy going and our conversations were very normal. Talking to each other seemed natural. Our stay prolonged and a strange relationship, a strong connection developed between me and my new boss. It seemed strange and it felt like I was replaying a tape over and over again. Maybe it was just d�ja vu. I tried preoccupying myself with other thoughts and ignored the growing feeling of warmth and chemistry between us. Of course by now he told me to call him Ferdinand and drop the formality. When I reminded him that we were now colleagues in the same work place he said he would only expect me to call him Mr. Ferdinand at work but that it would upset him if I continued the formality outside work too. Our rendezvous extended until 4 pm and by then I received about 5 calls from Susan which I ignored completely, I was enjoying his company far too much. It developed from general conversation to personal conversation and diverted to flirting. His face got closer to mine with each line he used and I would try to move away but something seemed to be drawing me to him. One word kept popping into my head. Familiarity. I decided I should answer Susan's calls and comfort her, so I politely excused myself and called her back. Susan was freaking out, as usual, and she was scolding me like a mother would a child. She shouted through her mobile: 'Where have you been? Why haven't you answered me? Does it really hurt for you to pick up and tell me where you are!?'. ...read more.

I knew she was a psychic, but even though she wasn't even looking at me, she knew I wanted to speak. This frightened me... After those long tense moments of loud silence, she spared me the anxiety and finally spoke to me. Her exact words were 'Follow your heart, it will lead you' and every time I urged her for an explanation she would find something to distract her. After a couple more attempts, I gave into confusion and asked her how much the session cost. She shrugged the question of, smiled at me and told me I could leave now. I thanked her, but she was in her own little daze, her auburn wavy hair covering most of her flushed face. I got up slowly, seemingly also in a daze and walked out of the parlour. Follow my heart? As I was contemplating this thought, Ferdinand walked up to me and asked me what I was doing inside a psychic's parlour. I shrugged and told him I don't know. He then took my hand and asked me again if I would go out with him. The words of the psychic kept replaying in my head. Follow your heart... follow your heart... And I knew one should always think before one acted and not let emotions lead one's actions and decisions. But I also knew this wasn't the advise the psychic had given me. The time passed as I was still thinking of a way to tell Ferdinand the truth. My heart was telling me to just tell him everything, from the dream onwards, so I did. I told Ferdinand I saw him in my dream the night before I met him and he was in a heart shape. He laughed at me and gave me a peck in the cheek and told me this time it was real. Sometimes in life, dreams come true and we relive our blind fantasy. ...read more.