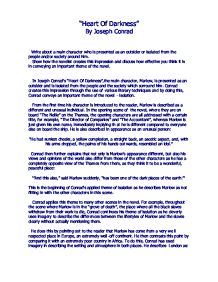 "Heart Of Darkness" By Joseph Conrad Write about a main character who is presented as an outsider or isolated from the people and/or society around him. Show how the novelist creates this impression and discuss how effective you think it is in conveying an important theme of the novel. In Joseph Conrad's "Heart Of Darkness",the main character, Marlow, is presented as an outsider and is isolated from the people and the society which surround him. Conrad creates this impression through the use of various literary techniques and by doing this, Conrad conveys an important theme of the novel - isolation. From the first time his character is introduced to the reader, Marlow is described as a different and unusual individual. In the opening scene of the novel, where they are on board "The Nellie" on the Thames, the opening characters are all addressed with a certain title, for example, "The Director of Companies" and "The Accountant", whereas Marlow is just given his own name, immediately implying that he is different compared to everyone else on board the ship. ...read more.

For example, throughout the scene where Marlow is in the "grove of death", the place where all the black slaves withdraw from their work to die, Conrad continues his theme of isolation as he cleverly uses imagery to describe the differences between the lifestyles of Marlow and the slaves clearly without actually mentioning them. He does this by pointing out to the reader that Marlow has come from a very well respected place in Europe, an extremely well-off continent. He then contrasts this point by comparing it with an extremely poor country in Africa. To do this, Conrad has used imagery in describing the setting and atmosphere in both places. He describes London as: "...the monstrous town was still marked ominously on the sky, a brooding gloom in sunshine, a lurid glare under the stars." To contrast the lifestyles and backgrounds of Marlow and the slaves, he compares Marlow's background to that of the slaves, which he is now facing in the "grove of death": "I came upon a boiler wallowing in the grass, then found a path leading up the hill. ...read more.

Conrad proves this to the reader by describing certain sudden feelings and reactions Marlow has when he is faced with the reality that these slaves face every day and the sheer shock it gives him. For example, when one of the dying slaves reaches out to Marlow as if in desperate need, all Marlow can think of doing is offering him a biscuit: "...the sunken eyes looked up at me, enormous and vacant, a kind of blind, white flicker in the depths of the orbs which died out slowly. The man seemed young - almost a boy... I found nothing else to do but offer him one of my good Swede's ship's biscuits i had in my pocket." This again shows the awkwardness Marlow feels in this strange land and makes him feel more isolated from the surrounding civilisation. In conclusion, I think that Joseph Conrad creates a very vivid impression of Marlow's isolation through the use of various literary techniques, including characterisation, setting and imagery. By doing this, he effectively conveys the important theme of loneliness and isolation. 822 ?? ?? ?? ?? ...read more.