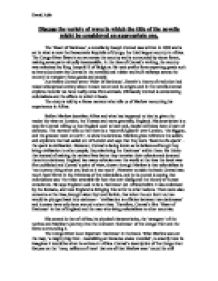 Heart of Darkness. Discuss the variety of ways in which the title of the novella might be considered an appropriate one.

Discuss the variety of ways in which the title of the novella might be considered an appropriate one. The 'Heart of Darkness', a novella by Joseph Conrad was written in 1899 and is set in what is now the Democratic Republic of Congo, the third largest country in Africa. The Congo River flows in an arc across the country and is surrounded by dense forest, making some parts virtually inaccessible. At the time of Conrad's writing, the country was colonised by King Leopold II of Belgium. He took profits from exporting goods such as ivory (as shown by Conrad in the novella) and rubber and built railways across the country to transport these goods and people. Just before Conrad wrote 'Heart of Darkness', Darwin's theory of evolution had raised widespread anxiety about human nature and its origins and in the novella Conrad explores how far we have really come from animals. Ultimately Conrad is condemning colonialism and the effects to which it leads. The story is told by a frame narrator who tells us of Marlow recounting his experiences in Africa. Before Marlow describes Africa and what has happened to him he gives the reader his view on London, the Thames and more generally, England. ...read more.

At all the stations which Marlow visits, the managers think they are there for a purpose, but maybe are not actually sure what this is. At first, when Marlow sees the canoes 'paddled by black fellows', he respects the native Africans and sees them as natural and part of what should be there in its place. As recognised by Chinua Achebe in his essay 'An Image of Africa: Racism in Conrad's "Heart of Darkness"', 'Conrad is a romantic....for Conrad, things being in their place is of utmost importance', and Conrad shows the blacks are in their place through Marlow's view: 'They shouted, sang; their bodies streamed with perspiration; they had faces like grotesque masks -- these chaps; but they had bone, muscle, a wild vitality, an intense energy of movement, that was as natural and true as the surf along their coast. They wanted no excuse for being there. They were a great comfort to look at.' Conrad's voice comes through when Marlow says that the native 'men could by no stretch of the imagination be called enemies'. He says this after he has described one black native in charge of others. ...read more.

Conrad has manipulated all his key points into one main idea and title. In my opinion, his main idea wanting to make the reader realize that we have not travelled that far from 'savages' and although we think we are now civilized and we can look down upon what we see as inferior races, we are only a short step away from our savage past. This is linked to Darwin's theory of evolution, published just less than half a century before the book was written. Conrad also uses the 'Heart of Darkness' to show his criticisms of colonialism and the greed of men. He does this using the examples of England being colonized by the Romans and then the European conquest of Africa, showing that previous events have not been learnt from and that the greed of mens' hearts is too strong for them to resist. Conrad uses Marlow as an example of the way in which we all discover that we ourselves have a heart of darkness. His imagery of light and dark gives the perspective of where these 'hearts of darkness' come from and what they can do to places - gloom over London where colonialists set out, darkness of Congo where terrible acts are being carried out and gets darker as Marlow gets closer to Kurtz's station. ?? ?? ?? ?? David Jubb ...read more.