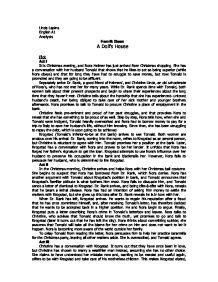 Linda Lapina English A1 Analysis Henrik Ibsen A Doll's House Plot Act l It is Christmas evening, and Nora Helmer has just arrived from Christmas shopping. She has a conversation with her husband Torvald that shows that he likes to act as being superior (while Nora obeys) and that for long they have had to struggle to save money, but now Torvald is promoted and they are going to be affluent. Separately arrive Dr. Rank, a good friend of Helmers', and Christine Linde, an old schoolmate of Nora's, who has not met her for many years. While Dr. Rank spends time with Torvald, both women talk about their present prospects and begin to share their experiences about the long time that they haven't met. Christine tells about the hardship that she has experienced- unloved husband's death, her being obliged to take care of her sick mother and younger brothers afterwards. Nora promises to talk to Torvald to procure Christine a place of employment in the bank. Christine feels pre-eminent and proud of her past struggles, and that provokes Nora to reveal that she has something to be proud of as well. Step by step, Nora tells how, when she and Torvald were indigent, Torvald heavily overworked and Nora had to borrow money to pay for a trip to Italy to save her husband's life, without him knowing. Since then, she has been struggling to repay the debt, which is soon going to be achieved. Krogstad (Torvald's inferior-to-be at the bank) arrives to see Torvald. Both women are anxious over his arrival. Dr. Rank, coming into the room, refers to Krogstad as an amoral person, but Christine is reluctant to agree with him. Torvald promises her a position at the bank. Later, Krogstad has a conversation with Nora and proves to be her lender. It unfolds that Nora has forged her father's signature to get the loan. ...read more.

Here, marriage is revealed to be full of alienation even when both spouses have supposedly chosen it themselves (theoretically, Nora was not under pressure to marry Torvald). Ibsen stresses that marriage should be based upon equity; Nora's sacrifice could not be compensated with the small sums of money that Torvald gave her (actually buying her physical love). A married couple should continue being individuals, not become each other's supplements. 7. Human, particularly women, rights 8. Men's tendency to treat women as dolls Ibsen notes the importance for each person to have the opportunity to explore and expose one's true identity. The play contains a powerful protest against role- playing that is often required and seemingly obligatory in the society. It shows how the individual can actually lose his own self (or never see a need to get to know who he really is and what he really thinks), pursuing the role that he mistakenly recognises as his own identity. Ibsen stresses that before being or becoming anything else, we are all equal human beings. As prejudices about the role that has to be played in family, are commonly afflicting women, and the main character is Nora, the play is more focused on women rights to their own lives, opinions and identities. The play also focuses on the theme of woman being a man's doll, which is itself nothing modern. This has been a common phenomenon, almost a tradition, established with the harems and polygamy before our era, and more than accurately proceeded until nowadays (one of the most popular striptease clubs in Riga is called "Dolls"). The play does not show the lasting nature of this tradition, but exposes it vividly and horribly enough. Characters Nora Helmer Throughout nearly all the play, Nora demonstrates herself as a naive, a bit silly, inexperienced and obedient wife to her husband Torvald. She can hardly be referred to as a person, for there is nothing personal in her character - all she is is what others, her father and Torvald, have made of her. ...read more.

I have decided to get a proper education and enter a proper high school, and then find an occupation that would perhaps bore me to death, but give me chance to help my brother. And not only him- it might happen that I have a bunch of people to take care of, anything might happen. But it might end up with them using me (approaching me as a money- making mechanism as Nora was approached as a doll) or feeling like they owe me. And I would partly have to give up my own true identity, too, to an extent, to do this money job. I do not know what I should do and what would be the right choice. But I am quite certain about what I will do. What seems to me uninteresting in this work is that it is so easy to see what the characters should do, to distinguish right from wrong. Of course, at that time the bond of marriage was considered more important, more sacred, than it is now, therefore the play could be received in a more disunited way- that Nora's decision was incorrect. However, I dislike that Torvald seems so absolutely wrong (and a bad person besides), while Nora looks unquestionably correct. Ibsen has made everything seem so obvious- he does not remind the reader of motherless children, but focuses on Nora's romantic, poetic quest for freedom. It makes the play too one-sided. However, the one-sided view does not deter the reader from paying more attention to another tendency in our society- the willingness with which individuals are ready to give up control over their lives, handing it over not only to their family members like Nora, but also to strangers (for example, reality shows; the excessive amounts of personal information often available to state; sadomasochism). I think that this fear of responsibility points to serious identity problems- so widespread that they have actually become problems of the whole society. ...read more.