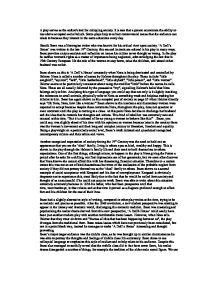 A play serves as the author's tool for critiquing society. It is rare that a person encounters the ability to rise above accepted social beliefs. Some plays help to reflect controversial issues that the audience can relate to because they interact in the same situations every day. Henrik Ibsen was a Norwegian writer who was known for his critical view upon society. 'A Doll's House' was written in the late 19th Century, this era and its traits are echoed in his play in many ways. Ibsen provides unique analysis and reflection on issues his culture never thought as wrong. In the play he tackles women's rights as a matter of importance being neglected, acknowledging the fact that in 19th Century European life the role of the women to stay home, raise the children, and attend to her husband was unfair. Ibsen shows us this in 'A Doll's House' constantly when Nora is being dominated and controlled by Helmer. Nora is called a number of names by Helmer throughout the play. These include "little songbird", "squirrel", "lark", "little featherhead", "little skylark", "little person", and "little woman". Helmer seems to be particularly consistent about using the modifier "little" before the names he calls Nora. ...read more.

After the 1848 revolution, a new modern perspective was starting to appear in the literary and dramatic world, challenging the romantic tradition. Ibsen was mastering and popularising the realist drama derived from this new perspective, 'A Doll's House' could easily have been just another modern play with another comfortable moral lesson. However, when Nora tells Helmer that they must sit down and "discuss all this that has been happening between us", the play diverges from the traditional form. Ibsen raises issues which have not previously been considered, but not in a point blank way, instead he manages to make 'A Doll's House' interesting and thought provoking. Ibsen's major target audience was the middle class, as he was brought up in similar circumstances he was able to portray the thoughts and feelings of middle class life accurately. Ibsen chose to use colloquial language to emphasize this style of realism and to help relate to his audience. Despite this Ibsen also managed to tactfully reveal that the middle class did in fact have some flaws, his realist drama disregarded a number of things, for example the tradition of the older male moral figure. ...read more.

Such deceptions can effortlessly develop and the responsibility spreads to others as we see when Mrs Linde becomes increasingly involved in Nora's deception when she had actually had no part in it what so ever. There are also the smaller lies Nora tells when Helmer asks her simple questions, "Not a nibble at a macaroon?" to which Nora answers "No, Torvald-I promise you, honestly-!" when we know that a matter of minutes ago Nora cleaned her mouth and placed a bag of macaroon's in her pocket. However, the most prominent of themes seems to be the rebellion towards society, especially in direction of the position and circumstances of women. This is demonstrated mainly by Nora as she breaks away from society in order to act on her own terms. From the start Nora has a small sense of revolt and little care for society, "What do I care about society? I think it's a bore." (pg40) this idea is clearly portrayed in Nora's decision to leave Helmer. It is clear that Nora's rebellion was very purposeful and to a certain extent planned, despite knowing what society expects from her, as a woman and a wife; she believes that it is her own right to do what she feels is true to her. ...read more.